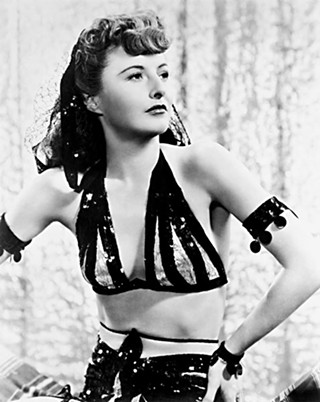 Around this time last year, the Austin Film Society programmed a short series devoted to early, earthy Barbara Stanwyck films made before the Production Code. The prune-faced Code, with its nagging ideas about propriety in film, went into effect in 1930. Now Stanwyck's back, the focus of another short series, this time devoted to the prime of her career in the late Thirties and early Forties. The films cherry-picked for this program all found a way to thumb a nose at the censors.

The series includes Lady of Burlesque, an adaptation of Gypsy Rose Lee's novel The G-String Murders that no doubt coughed up old memories for Stanwyck, a former chorus girl. The murder-mystery plot is forgettable; not so Stanwyck's opening burlesque number, "Take It off the E String (Play It on the G-String)." The film mostly cuts around her pelvic bump-and-grind, but a few seductive shimmies skated past the Code's edict that "dances suggesting or representing sexual actions or indecent passions are forbidden."

There's also the juicy melodrama Internes Can't Take Money, in which Stanwyck plays a recent parolee trying to find the daughter her estranged husband hid away in a foster home. A white knight wants to help – that's Joel McCrea as the titular surgical intern, Dr. Kildare (a character that would continue in film, radio, and TV into the Seventies) – but she'll get faster service by becoming the kept woman of a mafioso, despite the Code's stern opinions about "a woman selling her virtue."

But the most delicious pies to the eye of the Code can be found in the series' screwball-comedy bookends, The Lady Eve and Ball of Fire. They're both about a street-tough dame who wins over an egghead – one she nicknames Hopsy, the other Pottsy – but there's no point in a quality comparison; let's just say we're lucky indeed to have both. In Preston Sturges' effervescent The Lady Eve, Stanwyck plays a con artist, Jean, who accidentally falls for her mark, Henry Fonda's Charles Pike, a nerdy snake scholar and heir to an ale empire (hence "Hopsy"). Sure, Jean and her dad are crooks – a big Code no-no, which railed against glorifying criminal behavior – but the bigger "offense" is in how handily Stanwyck seduces Fonda. "Excessive and lustful kissing, lustful embraces, suggestive postures and gestures, are not to be shown," quoth the Code. Now cue the scene where Stanwyck mauls Fonda like he's an overgrown teddy bear, turning him on so hard he can't see straight. The audience is liable to go a little dizzy, too, from so much fun lust and tricksy wordplay. It's perfection.

Howard Hawks' Ball of Fire recasts Snow White as Stanwyck's sequined nightclub singer Sugarpuss O'Shea, with the Seven Dwarfs outfitted by a den of tweedy professors led by Gary Cooper's linguist, Bertram Potts, who wants to study Sugarpuss' exceptional skill with slang. Ginger Rogers, Jean Arthur, and Carole Lombard all said no to the part – too vulgar – before Coop suggested Stanwyck, his Meet John Doe playmate. Admittedly cruder than Sturges' The Lady Eve, Billy Wilder and Charles Brackett's script tap-danced right up to the line of decency. "Make no mistake, I shall regret the absence of your keen mind," says Cooper's virginal prof, assessing Sugarpuss' parts. "Unfortunately, it is inseparable from an extremely disturbing body." The cast and crew outfoxed the Code's ban on "obscenity in word, gesture, reference, song, joke, or by suggestion (even when likely to be understood only by part of the audience)," in part because they knew the very best jokes are the ones only half the audience is hip to. And when that hip is attached to the sublime Barbara Stanwyck? So much the better. 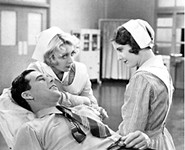 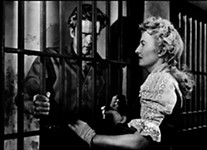