The sons of immigrants prove themselves on and off the pitch 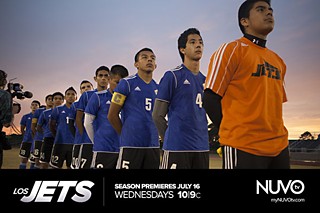 Even Mayberry has to change at some point. That's what the predominantly white community of Siler City, N.C., learned when this town of fewer than 9,000 (and burial place of Frances Bavier, best known as Aunt Bee of The Andy Griffith Show) became a destination for Latino immigrants seeking employment in the area's huge poultry industry. The population of the town's Jordan-Matthews High School became 68% Hispanic almost overnight, brimming with kids who brought pasts tainted by adversity, hopes for more fulfilling futures, and a deep love of soccer – to this very all-American football town.

Los Jets, a six-part documentary series, is directed by Mark Landsman and executive-produced by Jennifer Lopez. The show is currently airing on the J.Lo-backed NUVOtv, and weaves the stories of one season's varsity soccer players with the school's legendary championship team of 2004.

There was no soccer team in the small town until 2001, when investigative reporter Paul Cuadros, who'd relocated to North Carolina to study the migration, heard of the town's resistance to establishing a program. The situation felt uncomfortably familiar to Cuadros.

"I remember my older brothers not being able to play on a varsity program," Cuadros says of his own high school days. "I had seen them miss their opportunity to play. That's something I wanted to give these boys a chance to do." Three years later, in 2004, the Jets, a team made up almost entirely of undocumented boys and coached by Cuadros, went to their state championship and won it all.

Landsman, the director of the SXSW 2010 Audience Award-winning doc Thunder Soul (about the Kashmere Stage Band, a Seventies high school jazz ensemble in Houston), and a soccer fan in his own right, heard Cuadros on public radio recounting the story of the championship-winning team. Over the next three years the two soccer fans worked to bring the team's story to a larger audience. Landsman pitched the idea to Lynda Lopez at Nuyorican Productions, who handled most of the day-to-day operations. Lopez's sister Jennifer, he says, helped usher the project past the usual speed bumps.

"There's a certain kind of courage in putting yourself behind a project like this," Landsman says of the Lopezes. That courage was matched tenfold by the boys who star in the series and are forced to endure not only cleats from their opponents, but also jeers from the visiting crowds.

"Hey ref, wrap him like a burrito," yells one "supporter" after a particularly rough play. "Take your hurt players and go back to Mexico where you belong!" No matter how cutting the insult or brazen the foul, the Jets respond with poise, gymnastics, and more goals. They can only rely on each other, their fans, and Cuadros out on the field.

"I know the big issue on the front page right now, of course, is the migration of Central American kids into the country, along the border in Texas and Arizona," says Landsman, who further suggests, "If you want to see how those kids can integrate into our society, then look at this program. Once they get here, come into our schools, and once they assimilate into our society, there's no real difference. They can be as American as anybody else."

Los Jets screens on Wednesdays at 9pm on NUVOtv; the series can also be viewed on Hulu.