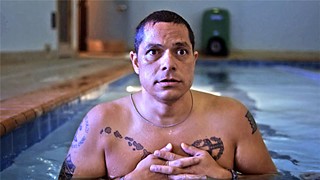 "One foot in front of the other," commands physical trainer Jerry Campbell. The man in the pool heeds the order. His body seems strong and willing despite involuntary tremors. He moves with determination, the tattoo of his home state Hawaii on his right pec trembling slightly with each stride. "Heel-toe!" Campbell barks encouragingly, but firmly. "Step! You got it? All right. Don't force it, feel it."

The man in the pool, Dennis Cabanting, served in Iraq and returned a profoundly changed person. He came back with PTSD, courtesy of an IED attack, the blast of which, he says, "went through my head, rattled around my brain, and left." What was left is a traumatic brain injury that may have triggered multiple sclerosis. His homecoming means completely starting over.

"They trust me with weapons. They send me to war," reflects Cabanting. "And now I'm a little kid. I gotta learn how to walk. What's up with that?"

Cabanting's story is one in a 12-part series about returning vets facing the harrowing minefields of medical insurance, social services, and the VA. What connects the various servicemember stories is the nonprofit Wounded Warrior Project, and the navigational help it provides. WWP has produced the series to air as a part of the MSNBC cable television show Taking the Hill.

Iraq vet, former member of Congress, and Taking the Hill host Patrick Murphy introduces a new episode of Wounded: The Battle Back Home the fourth Sunday of each month, with segments teased online Thursday-Sunday. The series launched the Sunday before Veterans Day 2013, and runs through October 2014. The upcoming July installation, "Dennis – Operation: Independence" is the series' ninth.

Wounded is a collaboration between WWP and Flow Nonfiction, an Austin production company that specializes in cause marketing and branded film production – a smooth way to say commissioned content via paid partnerships in which partner/subjects actively participate in the messaging. Accord­ing to Executive Creative Director David Modigliani, Flow first met both WWP's communications director and MSNBC.com Executive Editor/on-air personality Richard Wolffe at South by South­west. WWP later followed up, says Modigli­ani, eager to enlist Flow to produce something for their 10th anniversary.

Since their formation, Flow Nonfiction has been hired by Downy, Boys & Girls Clubs of America, Pantene, Juvenile Dia­betes Research Foundation, Bing, Tide, and the Clinton Global Initiative, among other corporate and nonprofit concerns. Flow chooses clients based on its own metric of what constitutes "cause." This current WWP gig is unique. Where most projects have been short campaigns or one-off films, this is the company's first full-fledged series.

The series, says Modigliani, "has the biggest scope of any project we've done. It's the most meaningful content that we've worked with to date – this is not an infomercial; these are films about individual veterans." Flow has creative control within prior agreed-upon constraints, he says, and confers with the clients about the mission. The project is unique in another way: "We are reaching the biggest, broadest audience we ever have."

Flow's other executive creative director, Matt Naylor, describes the nature of the collaboration. They rely on WWP to vet the vets and other subjects involved in the project. "We send the first cut to Wounded Warrior Project. Once we hear feedback, we'll send it to MSNBC's Standards & Prac­tices [department]."

Trust is key in these types of relationships. WWP is, says Modigliani, "a trusted entity within the veteran community. ... Our preproduction needs [necessitate our asking about] very intimate and personal subject matters." Once Flow is in the field out on a shoot, WWP's reputation eases the natural tensions that come with the lumbering presence of a film/TV crew. Subjects are sharing stories about physical and mental trauma. "People with cameras," says Naylor, "that's a red flag." Modigliani interjects, "Some of [the subjects] have had negative experiences in the past of feeling exploited."

In one instance, midshoot, the crew was interviewing a female vet and victim of sexual assault. "One of the questions was, 'Are there things that still trigger you?'" remembers Naylor. "She listed a couple of things, including 'being cornered in a room with a lot of men.' And I look, and we've blocked her in – two big German cinematographers and me. And I'm like, 'Wow this is it. This is her nightmare.'"

"We were quick to back off," says Modig­li­ani. And there's no question, he says, that WWP offers full support in these decisions – budgets and shooting schedules be damned. In one other case, Flow was deep in postproduction with an episode. The subject "got cold feet about having his story out there, and Wounded Warrior said, 'No problem. It will never be seen again.'"

Interestingly, this vacancy made room to add one more soldier's story, and as the group was producing the episode, "Angie – Operation: Educate," they discovered Dennis.

"I wasn't cool about it at first," says Den­nis Cabanting's mom, Julieann Najar, about the idea of a film crew plopping into his life to excavate and possibly stoke further trauma. She spoke to me via phone from her home in St. Louis, where the episode takes place. Her fierce, mama-bear spirit is a big part of it. Her voiceover narrative drives the sequence showing Dennis successfully showering. "You could see the pain in Dennis' face because he was so demoralized," she relates. "His mom has to do this for him. He hated it, and I hated it for him."

Najar herself has been involved with troop support since the Vietnam War. She runs her own nonprofit, A Soldier's Wish List, and knows this community. She has nothing but the highest praise for WWP. Once the Flow crew arrived and set up shop, her fears were allayed. "They spent the week here and were so good to Dennis," she insists. "They even went to the birthday party," she says referring to Cabanting's Hawaiian-themed 40th fête shot for the episode. "I adopted them."

The subjects and their stories are certainly the ground force of the series. But the unsung hero of the show is the original score created for each episode. Flow co-founder and President David Rice, among many other things, oversees all music, acquired and scored. On the day I visited the Flow compound, score composer Billy West was busy working on the soundtrack of the current episode in the studio behind Rice's house. The studio served as the first workspace for the burgeoning branded film firm. Rice came to the project with a full résumé (Nineties Houston songsmith, major-label recording artist, television/commercial composer, and music supervisor for Modigliani's Crawford – the 2008 doc about George W. Bush's transplanted hometown).

While the core of Flow remains small, a cadre of established (mostly local) partners in color correction, sound design, audio mix, motion graphics, freelance editors, and musicians – such as Tosca Strings, Ephraim Owens, and Ramy Antoun – round out the mix. The company has grown enough in scope and logistics to require an office across three different lots, located on the same street as Rice's home.

Rice feels this current project reflects where Flow is at in its growth. "We feel like we've been given the resources to make, honestly, the best work we've been able to do, to date."

Dennis Cabanting, all big brown eyes and goofy grin, directly addresses the camera more than once during the show. It's clear what the filmmakers saw in him and why they chose to ask WWP to include his story. The combat engineer-turned-truck driver whose life was obliterated by an IED attack in Iraq had to come home to rebuild, landlocked in St. Louis.

In the episode's first few scenes, he's immersed. "I love the water. It feels like home," he says. As the camera peels through a perfect swell (shot who knows where – not St. Louis, that's for sure), he pines: "When I dream about surfing, it's like heaven. I dream of taking the bottom turn, pulling into a tube, shooting it, and coming out clean. Every time. But it's just a dream."

In witnessing – through the lens of a few Austin filmmakers – how far this ol' surfing soldier comes, just in the course of one episode, it's easy to hope, to imagine, to believe on his behalf, that maybe it's not just a dream after all.

Wounded: The Battle Back Home next airs on MSNBC's Taking the Hill, Sunday, July 27, with online teasers released Thu.-Sun., July 24-27, at www.msnbc.com.