The racial realities of 'Getting Back to Abnormal' in New Orleans 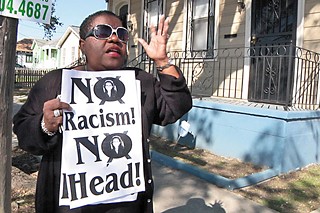 The city of New Orleans could see it coming like a Category 5 hurricane gaining strength over the Gulf: After the destruction, death, and displacement wrought by Hurricane Katrina, the balance of black and white power dynamics in America's friskiest "Chocolate City" would seismically shift, if not fully capsize.

This week, PBS's longest-running documentary-dedicated TV series, POV, will air Getting Back to Abnormal, which spotlights race in post-Katrina New Orleans through the frame of one specific "race": the re-election campaign of the first white council member of NOLA's Uptown (aka District B) in more than three decades.

Whether that tipping point came sooner or later, due to malfeasance or malingering, malicious intent or malaprop, there is one fact upon which everyone can agree: The city that care, time, and George W. Bush forgot got hosed first by nature, then by socially engineered shenanigans. So stories about white candidates gaining ground in traditionally black districts can feel a little prickly.

Relying on combined NOLA connections and shared experiences, a collective insight into political fracas, and perhaps a li'l voodoo, the film's four co-directors – Paul Stekler, Louis Alvarez, Andrew Kolker, and Peter Oda­bash­ian – have worked together in some form or fashion on docs featured on POV before, including Louisiana Boys: Raised on Politics (1992) and Last Man Standing: Politics – Texas Style (2004). Interestingly, co-direcor Stekler – UT prof and Variety magazine's Mentor of the Year – began his academic career teaching Southern politics at Tulane and polling for political candidates in New Orleans, ironically, for one client whose protégé was later defeated by the District B council member/subject of this film, Stacy Head.

First elected in 2006, the chatty, catty, and very direct Stacy Head is known as an accomplished and effective member of city council. Her achievements, however, have been somewhat overshadowed by her sharp tongue and bull-in-a-china-shop approach to racial sensitivity. To a large segment of NOLA's black population, she's a fistful of very white powdered sugar blown into the face of the city from a plate of beignets. She makes for great doc fodder, as does her scene-stealing Sancho Panza and professional aide/ass-coverer, Barbara Lacen-Keller. Lacen-Keller is a very well-connected black community dynamo and maternal figure who damage-controls for her wacky boss.

The film moseys along like a second-line parade, alternately a campaign diary, an exploration of race in America, an indictment of post-Katrina malaise, or a love song to a city dear to the heart. It's a pleasant stroll featuring a perfect soundtrack, cameos of many happy haunts like Betsy's Pancake House, Cafe Reconcile, the Vikings/Saints playoff game, the Zulu parade in blackface, as well as armchair soundbites from beloved pundits like high-profile attorney Buddy Lemann, civil-rights warrior Raphael Cassimere, attorney and head detractor Tracie Washington, post-K housing activist Stephanie Mingo, and Treme creator David Simon.

What the film lacks in dot-connecting, it makes up for in spunk. And while some of the driving arguments about race, social unrest, and a re-emerging city are backseated to the overriding feel-good option of forgetting care, the film makes a case for "abnormal" and New Orleans – despite her eternal struggles – being a pretty fine place to be.

Getting Back to Abnormal airs Monday, July 14, 9pm on KLRU.

READ MORE
More Getting Back to Abnormal