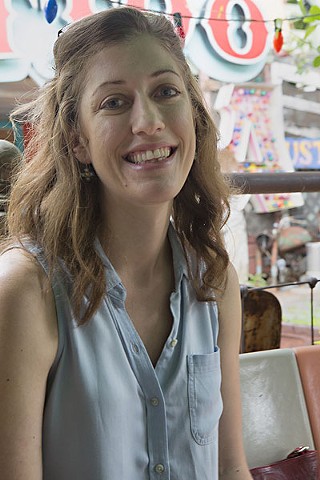 When I meet filmmaker Annie Silverstein at a local coffee shop on a recent rainy morning, she's already sipping on some caffeinated goodness from a steel tumbler she brought from home. "It was for the ride here," she explains with a laugh.

The wild ride started a while back, when Silverstein's thesis project "Skunk" was accepted into the Cannes International Film Festival's prestigious Cinéfondation Selection, one of only 16 student films chosen from 1,631 submissions. Silverstein's short eventually took first place at the May festival. That win came with over $20,000 in prize money and a guarantee that when she makes a feature, it will screen at Cannes.

"I felt like we already won, you know, being there at Cannes and being one of the 16. The competition wasn't even in my mind," Silverstein recalls. "I don't even think I told my parents there was a competition, so when they found out I won, they were really surprised. I've never been in a situation where there is this announcement, and you're there, and before you can even process what you're hearing, you have to get up and give a speech."

Initially, film was far from her viewfinder. While studying history at Macalester College, she started working with Phillips Community Television as their program coordinator, which led her to do similar work in Washington with Native American communities in both urban and rural areas. Silverstein co-founded the Native Lens Program in 2003 in partnership with the Swinomish Tribe, which led her to co-found Longhouse Media, another nonprofit, in 2005.

"I didn't watch a lot of movies growing up, I didn't study filmmakers. I was a community worker," Silverstein explains. "We were using video cameras and other visual storytelling mediums to share stories about their lives and to address issues these kids were facing in the community. I became more and more invested using film as a tool in which to do that work."

Wanting to get more formal training in filmmaking, she enrolled in UT's intensive MFA in Film & Media Production program. The first seedlings for "Skunk" started to sprout during her first-semester screenwriting class. The premise of the story, then titled "Old Girl," was simple: a young boy involved with dog fighting in his community. But it wasn't working. A friend of Silverstein's pointed out the lack of female characters in her writing, and so Silverstein retooled the raw material of "Old Girl" to a female perspective, focusing on a significant day in a girl's life as she experiences her first sexual encounter and its ripple effects.

With her background mostly in documentary filmmaking, it's no surprise Silverstein wanted "Skunk" to be as real and raw as possible, and that mission included casting young people who could bring their own personalities to the project.

"Casting is a big net, and we wanted to see as many kids as possible. We went to public high schools, after-school programs, posted on Craigslist, went to skate parks and the mall. In the end we found Jenivieve Nugent and Kiowa Tucker."

"Skunk" was shot in Austin over 10 days last summer. The production crew featured UT undergrad and graduate students, as well as recent grads. When the film was complete, Silverstein began submitting the short to festivals far and wide.

Shortly after her Cannes win, Silverstein went on to win both the audience and jury prize award at the BAFTA/LA Student Film Awards. (This year marks the first year the organization included entries from film schools outside Southern California.) "Skunk" continues to make its way on the film festival circuit; most recently, it screened at the Houston Film Commission's Texas Filmmaker's Showcase.

Silverstein graduated from the MFA program in December of last year. As to what she'll tackle next – the possibilities are endless. "I feel like I'm in this incubation period right now," she says. "My heart isn't just in fiction or documentaries; it's in many things. I've sort of been flip-flopping between the two, and if I was able to do that for the rest of my life, I'd be a very happy person, but at the same time I love working with youth."

As to whether she might expand "Skunk" into a feature, Silverstein isn't telling.

"Whatever opens up, that's what I'll do."