Scenes From a Creative Partnership

The films of Liv Ullmann and Ingmar Bergman

Liv Ullmann and Ingmar Bergman on the set of Persona

This July, the Austin Film Society celebrates the collaboration between one of the 20th century's most influential filmmakers and his greatest muse with the Essential Cinema series "Liv and Ingmar." The coupling and creative impact of Ingmar Bergman and Liv Ullmann not only invigorated Bergman's career, but left an indelible mark on film history.

When the two met in Sweden in 1965, they were both married to other people. That was not to last. It was actress Bibi Andersson, a friend of Ullmann, who introduced the two, and Bergman immediately asked Ullmann to be in the new film he was prepping, The Cannibals. That screenplay was shelved when Bergman was briefly hospitalized, but through this confluence of events, Bergman wrote a story for Ullmann and Andersson, and, voilà, Persona was born. As effective today as it was when released almost 50 years ago, this tale of an actress (Ullmann) with an inscrutable affliction and the nurse (Andersson) who cares for her still packs a punch, while deconstructing subjectivity, identity, and the medium of film itself, in Bergman's signature minimalist style.

In 1969's The Passion of Anna, Bergman and longtime cinematographer Sven Nykvist work in color, however muted, for only the second time to create this story of two wounded souls on a remote Swedish island, who briefly find solace in each other before their inevitable emotional and existential breakdown. A bit of a hidden gem, the film is notable for the use of disconnecting interviews Bergman conducts with the actors about the characters they're playing, which are intercut into the film at crucial dramatic moments – a trick he picked up from Jean-Luc Godard, a filmmaker he famously derided. This is Bergman at his most introspective (if that's possible), and it's especially easy to read the problems of the protagonists as mirrors of the drama of the couple behind the scenes.

The bloom was off the rose, and Bergman and Ullmann had been separated for two years when they reconvened for the 1972 arthouse staple, Cries and Whispers. Taking place within the confines of an ornate country mansion, Ullmann plays the coquettish Maria, one of two sisters who care for the third, Agnes, who is dying of cancer. Each encounters a revelatory moment in a film awash with red, black, and white. No one leaves without her identity shaken.

By 1973, Bergman and Ullmann's affair was a footnote, but along comes Scenes From a Marriage, a work whose influence continues to be seen today, most recently in Richard Linklater's Before trilogy. The film highlights some of Ullmann's best work (with frequent Bergman collaborator Erland Josephson), and is notable for being publicly condemned as the cause of a spike in Scandinavian divorce rates (which doubled after the film was released).

That brings us to Liv & Ingmar, the 2012 documentary making its Austin debut. In the film, Ullmann waxes philosophical about her relationship with the great director, but those looking for on-set intrigue and drama should look elsewhere, as this worshipful doc errs on the side of the elegiac. Ullmann doesn't spare the rod, but she tends to curb the criticism about her former lover, focusing on lost love letters and idyllic days, leaving the meat and potatoes to grow cold on the table. Still, when the temps are hitting triple digits, it's nice to have a Swedish bracer of ennui and isolation to cool the intellect and, in this case, the heart.

July 10: The Passion of Anna

July 24: Scenes From a Marriage

All films screen at 7:30pm at the Marchesa Hall & Theatre. 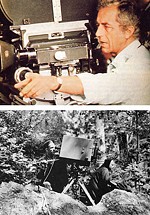 DVD Match
Antonioni vs. Bergman from beyond the grave 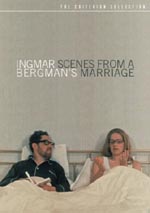 Scenes From a Marriage
After Bergman's marriage-is-hell miniseries premiered in the Seventies, appointments for family counseling in Sweden increased, and the divorce rate swelled in Denmark