Apocalypse by the Trainload 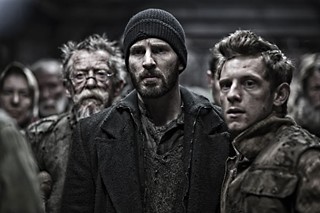 Bong Joon-ho is sweating. It's the South Korean director's first visit to Texas, and the weather could not be more of a polar opposite to the frozen Earth of his new post-apocalyptic feature Snowpiercer. Yet even in the air-conditioned, first-class carriages of the Hill Country Flyer, which is roaring along the railway tracks to a special Rolling Roadshow screening in sleepy Burnet, Texas, Bong occasionally lifts his glasses to wipe his face.

Cinema and trains grew up together, and many directors have found drama on the rails. The appeal is obvious, with trains combining the tension of a sealed, one-room thriller with the adventure of a road movie. Bong has a favorite of the genre: "John Frankenheimer. The Train. Burt Lancas­ter. I love that movie." Now he has his own tale of the rails. He first discovered his source material, the 1982 French graphic novel Le Transperceneige, in his local comic shop almost a decade ago. The basic idea intrigued him: Earth, caught in a new Ice Age, is devoid of all life save for a crumb of humanity locked on a self-propelled, self-sustaining train, the Snowpiercer. The story was riddled with class consciousness, and featured a passenger confined to the crowded and stinking rear of the train who's in love with one of the pampered residents of the first-class carriages. Bong kept the machine, but replaced everything else. As with his international breakout success – 2006's ecological monster metaphor The Host – he saw political allegory in the confines of the Snowpiercer, a wheeled ark going in an endless circle. Over the clanking of the Flyer's progress, co-producer Dooho Choi intercedes as Bong's translator when the director's answers exceed his English-language skills: "You can tell a very bold story or subjective story in this kind of sci-fi action genre, and be very direct about it."

Every developed nation has a train system, and understands the inherent class connotations of its structure: the rich at the front, the aspirational middle class in the center, and the poorest cattle-carred at the rear. But for Bong, it comes with additional gravity. In Korea, the railway was a sign of oppression. The director said, "In my grandfather's generation, the train is some kind of memory of the Japanese colonies." Built between 1910 and 1945, the rail system was used to strip the Korean peninsula of rice and crops, and steam them away to ships bound for Japan. By the time of his father's generation, Choi explained for him, "He thinks of the train and he thinks of the Korean War. When the North attacked, many people fled to the South on trains. But his generation, when they think of trains, it's about going to the countryside and reading and playing cards."

Knowing that every nation has some history with the railroads allowed Bong to assemble a truly international cast. America's go-to leading man Chris Evans plays Curtis, right-hand man to the leader of the tail-enders, Gilliam, who is played by the very British John Hurt. They conspire to end their subjugation at the hands of the unseen Wilford, the train's designer, engineer, and master. But that means making it from the caboose to the engine, and that requires the assistance of Korean security expert Namgoong Minsu (Bong's longtime collaborator Song Kang-ho) and his daughter Yona (Song's co-star from The Host, Ko Ah-sung). "The focus wasn't on the ethnicity," explained Choi. "It was really on whether this person was poor or rich or had power. The characters of Yona and Nam were Korean, and they look Asian, but they don't do specifically Korean things, like eat kimchi or do taekwondo." As the dour, morally wracked rebel Curtis, Evans marks a dramatic change from the lantern-jawed, sure-handed morality of his time as Captain America. Bong undeniably provides him with several action scenes, including a monumental axe fight (reminiscent of his producer Park Chan-wook's hammer battle in Oldboy). Yet he worked closely with costume designer Catherine George to hide his leading man's muscles: After all, Curtis has survived for 17 years on flavorless protein blocks, doled out daily by Wilford's minions, and has never even seen a gym. Choi explained for Bong, "Between his big Marvel movies, Chris sought a lot of adventurous films, but you just haven't seen [them] because they couldn't get [widely] distributed. He wants to do dark films."

Bong nods. "The Iceman with Michael Shannon. In that movie, he's a teacher of killers."

The face of malevolence in Snowpiercer, Minister Mason, is the officious, imperious bureaucrat dispatched by Wilford to impose his will on the rear quarters. Under buck teeth, Coke-bottle glasses, and a restrictive woolen suit, Tilda Swinton evokes the callous efficacy of Margaret Thatcher (with no small irony, a politician who did as much as any to dismantle Britain's once-legendary train system). The part was originally written as a middle-aged man, and Bong admits he thought about John C. Reilly. But after a breakfast with Swinton, he rewrote the role for her, and found she relished the sharp political allegory. Bong said, "Tilda, sometimes she called me 'Dear Bong, my comrade.' We left-wingers, together." Just as Bong changed the role, Swinton swapped her London accent for the compressed vowels and glottal stops of Yorkshire, the industrial heartland of the North of England. Bong said, "We shared deciding what kind of character she is, and Tilda said, 'what about Yorkshire-sound?' and that was that. It sounds good, so let's do that."

Like Thatcher, who was born a grocer's daughter, there's a deliberate sense of social-climbing in Mason. Choi explained for Bong, "That's something he talked about with Tilda. She first came on the train as a lower-class person, perhaps even a cleaning lady. She somehow met up with Wilford, he trained her and over the course of 17 years she rose to become minister. That's why, when she goes to talk to the tail-section people, she comes over very snobbish."

And then there's the greatest character of all: the Snow­piercer itself, a roaring, rickety, mechanical beast. In its bowels, as Mason explains portentously, everyone knows their station. Choi said, "If you were to cut the train in half, the front would be about fakes and artificiality. They pretend that they're OK and living this beautiful, luxurious life, but it's a lie, and Mason is the representation of that world." The gilded glamour of the front end contrasts with the plate metal and grime of the boxlike rear. Choi translated, "The idea of all these people in a windowless tail section really gives you a sense of claustrophobia." Not easy, considering the scale of the set. A total of 26 cars, each 20 meters long, were built, and 10 of those were mounted on gimbals – Bong pauses, picks up Choi's phone, and places it next to his own, to show how they bucked and swayed next to each other. Choi translated, "In Tilda Swinton's speech, you see that people behind her are moving independently of the car that she's on. So if you're shooting in there all day, you get dizzy."

Snowpiercer opens this Friday at the Alamo Drafthouse Lakeline. For review and showtimes, see Film Listings.