Before You Know It looks at aging gay communities

Old age creeps up on us all – if we're fortunate. Our tendency, however, is to shunt that inevitability toward the dark, murky recesses of our thoughts: Out of sight, out of mind. That attitude, perhaps, applies doubly to the LGBT community, where there tends to be an emphasis on pretty, young things and happy, rainbow flags. But the Reaper does not discriminate; he comes for every one of us. Even as unprecedented cultural and political inroads mark the new millennium, the Stonewall Riots generation is retiring and becoming the first multitude of out and visible gay seniors.

Before You Know It is Austin cinematographer and film director PJ Raval's documentary about the unique challenges faced by LGBT seniors, whose numbers are estimated to be in the vicinity of 2.4 million. Even though Raval was named one of Out magazine's "Out 100 2010" and Filmmaker magazine's "25 New Faces of Independent Film" in 2006, the subject matter is a curious choice for a filmmaker as young as Raval.

Raval cites several things as his sources of inspiration for this project, beginning with his mother and conversations they've had about her retirement and thinking about "everything that goes into that financially, emotionally, and mentally." Also, while Raval was touring with his feature documentary Trinidad (about the Colorado mecca for sex-reassignment surgery), he began to notice the large numbers of older gay men who attended the screenings. They struck him as "the living embodiment of what could be called the gay civil rights movement ... a generation of seniors who were born pre-civil-rights era and have now lived to see DOMA crumble and marriage equality. Through Stonewall, through Harvey Milk ... they've seen such a large amount of change in their lifetimes." Finally, Raval drew inspiration from a filmmaking class he was teaching for Austin's Queer Youth Media Project. "Some of these kids were 14, 15 years old, and they just couldn't imagine what previous generations had gone through."

These factors started Raval thinking about the aging process and the idea of "an aging community .... I did a lot of research at first, and I uncovered a lot of startling statistics" about heightened levels of discrimination, neglect, and exclusion faced by gays over 55. Nevertheless, Raval wanted to "put a face to these statistics." Three men were chosen as the film's subjects and Raval filmed them over a great period of time while his editor, Kyle Henry, kept an ongoing assemblage of the footage. Dennis is a widower in his 70s who began exploring his sexual identity and fondness for dressing in women's clothes after the death of his wife. Ty is a New York activist who focuses his attention on the needs of the gay population in Harlem, and is now attending lots of weddings since gay marriage was legalized in the state (compared with all the funerals he attended during the height of the AIDS epidemic). Robert is the irrepressible owner of a gay bar in Galveston, Texas, where he's the ringleader of a tight-knit barroom community.

If you've ever wondered where old queers go when they don't own a palace – or if you've never given the question a single thought – Before You Know It confronts the taboo subject of aging with refreshing candor and great insight.

Before You Know It opens Friday at the Violet Crown Cinema. See Film Listings for showtimes and review. 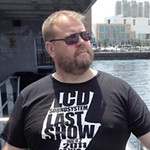 PJ Raval, Before You Know It, Kyle Henry