Film What You Know

Michael Tully's 'Ping Pong Summer' turns the clock back to 1985

Mount Airy, Md., is a tiny town of about 9,200 people that nestles into the foothills of central Maryland, about an hour north of Washington, D.C., and 40 minutes west of Baltimore. The town is laid out over 4.13 square miles, and its foremost attraction forever stood as the B&O railroad train station, a red brick building that is now a pharmacy.

This is where Michael Tully comes from. He's a product of this boredom. Growing up in the Eighties, he found solace in the kinds of things that bored, small-town kids usually turn to: pingpong, baseball, other sports, and the radio signals from bigger cities. With his three sisters and two blue-collar parents, he'd hit the amusement parks in the summer: Hershey Park in Pennsylvania and Kings Dominion outside of Richmond, Va.

For one week every year, they'd all trip down to Ocean City, the preeminent waterfront destination in the beautiful and just-fine state of Maryland. Within the coastal town lay a land of seafood buffets and sunburns, punk kids and freaky old ladies, and arcade games and Boardwalk Fries. The vacation spot would, eventually, become the foundation for the film that Tully would toil over for two decades.

The idea first came to the 39-year-old, two-year resident of Austin's Cherrywood neighborhood while he was in high school: "What if I wrote a love letter to my own adolescence," he remembers thinking in 1992, and "inserted it into the movies that I un-ironically loved in the Eighties?" Movies like Summer Rental, with John Candy, or Chevy Chase's 1983 classic National Lam­poon's Vacation. Ocean City would be the setting, no question: destination for discovery, heartache, and that eventual maturation.

The whole thing was a pipe dream. Back then, Tully actually wanted to be a writer. He went to Flagler College in St. Augustine, Fla., to study English but, before he knew it, he ended up caring more about movies. One year later, he was back in Maryland, taking classes at the University of Maryland, Baltimore County.

Tully moved to New York, and started temping in at offices. He scored some good film credits (costume designer and makeup artist on David Gordon Green's George Washington in 2000), got married (to Holly Herrick, the associate artistic director at the Austin Film Society), and directed his first film in 2006 (Cocaine Angel, screenwriter Damian Lahey's dark study of a young Floridian drug addict).

Meanwhile, he kept working on the movie that would become Ping Pong Summer, the story of Radford Miracle, a 13-year-old kid who likes hip-hop, breakdancing, and some other stuff that hadn't yet registered. 1985 was Tully's canvas – his own adolescence was what he'd paint with.

He'd revisit the town every winter, and build peripheral characters for background: his aunt, a pool rat, this cute cousin of the "it" girl. He remembered "Friends," the Brooklyn rapper Whodini's second-generation hip-hop jam, and the way the world changed when he heard it. The next year, all the kids at the beach were learning about beatboxing. In 1985, that stuff from Krush Groove was just him.

His film about Maryland's preeminent beach town, Ocean City, earned Michael Tully a chance to throw out the first pitch at a Baltimore Orioles game.

He'd reference important clubs in Baltimore and the roller coaster he first rode on. He tried changing the town's name to Watertown in order to make it less specific. It had to be Ocean City, he eventually decided, and reverted back.

"I remembered my appreciation for movies, and why I like stuff like Thai cinema," he says. "I've never been to Thailand. The emotions are universal. All the specific shit within that is when it gets fun. It doesn't become alienating to people. It's actually more inviting that way."

Tully wrote a different movie: Septien, a hodgepodge love triangle, which combines sports movies with Southern Gothic styles and a made-for-TV template. "Me throwing the middle finger" at industry standards, Tully says of it. (Tully directed Septien, as well.) It was bought by IFC Films a month before 2011's Sundance Film Festival. The guy who brokered the deal, George Rush, an entertainment lawyer from San Fran­cis­co, is the same one who helped bring Ping Pong Summer to fruition. "What else ya got?" he asked, when they met in Sundance to celebrate. Tully remembers he told Rush about his project.

"He was like: 'Your baby is an Eighties movie about pingpong and hip-hop?'" Tully laughs. "'Are you kidding me?'"

Rush thought it could bring good business, so he set out to raise some capital. Meanwhile, Tully tried to convince Rush they should film in Ocean City. The two took a trip together. "We got there and he got it," says Tully. "It was so intertwined within the vision. That's where my family went."

They shot over 28 days, with a kid who'd never acted before (Marcello Conte) playing the lead character Radford like an awkward teenager. He appears in every scene; you could say the same of Tully. Their dads are state troopers from Ireland, their moms are fiscally frugal and frightened. Three sisters become one. The film moves slowly because that's how life went.

"We tried to tell the story very firmly from a first-person, 13-year-old's perspective," explains Tully. "But I do think there's an overriding coat of an almost 40-year-old being content and grateful and knowing the stakes weren't that high back then."

Twenty years of deliberation over Ping Pong Summer allowed Tully to adopt a reflective angle while filming and editing, and has imbued Ocean City with an identity akin to that of Aunt Peggy, or the ICEE guy, or the bully's buddy – a snot-nosed, ginger kid named Dale Lyons. He's a secondary character, peripheral to Radford's three-track world of pingpong, Wild Style, and a really stunning girl named Stacy. In fact, it may even be that Tully needed Ocean City in Ping Pong Summer more to get it made than to get it watched.

"Some of the people from Maryland who watch the movie are like, 'How could anyone who's not from Maryland watch this?'" Tully says. "We've had a good run. We premiered internationally at Rotterdam [Film Festival] in Holland and played to a bunch of Dutch people who had never been to Ocean City. In most of the towns we screen, at least one person will come up and say, 'My Ocean City was this town,' and give a name."

You could say that it was Watertown. 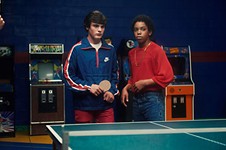