Toe to Toe With a Life in Dance 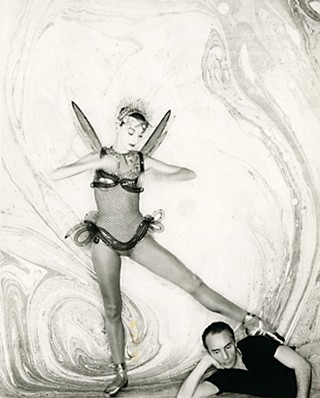 Making a film about ballet probably lies somewhere along the continuum between writing about music and dancing about architecture (a little "inside-the-Chronicle" reference). A documentary, however, might well be the perfect medium for presenting the high bravura drama that was the life of Tanaquil Le Clercq (1929-2000), one of the great 20th century ballerinas. In Afternoon of a Faun: Tanaquil Le Clercq, filmmaker Nancy Buirski profiles Tanny, as she was affectionately called by those who knew her, the Paris-born dancer whose professional and personal trajectory soared early, before plummeting tragically and settling, finally, into the bittersweet.

Tanny, explains her devoted longtime dance partner Jacques D'Amboise, appeared on the ballet scene at a time in the Fifties, "when dancers were usually short, quick, stocky, and fast. Then along comes this elongated, stretched-out path to heaven that she was." Her height, elegant aquiline nose, and unique sense of music and movement would become inspirational fodder for choreographers Jerome Robbins (who choreographed her in Debussy's Prelude to the Afternoon of a Faun, scenes from which, along with clips from other rare ballet footage, we're treated to in the film) and George Balanchine, both of whom would also fall in love with her.

Le Clercq first caught Balanchine's eye when she was 14 and a student at his School of American Ballet in New York. He made her his muse, his new, prototypical prima ballerina and – as was the Balanchine way and Robbins' loss – his fourth wife. He was 48; she was 23.

Tragedy struck in 1956, at a time when the polio virus was as yet untamed. As the New York City Ballet prepared for a European tour and dancers lined up to receive their Salk polio vaccines, Le Clercq dropped out of line, thinking she'd wait and get her vaccine when she returned home. Traveling unvaccinated, she was stricken with the virus in Copenhagen and spent several months in a Danish hospital. Archival clips of polio victims being treated in huge wards, equipped with iron lungs is a familiar Fifties newsreel memory. Le Clercq would never walk, much less dance, again. She was 27.

Balanchine threw himself vigorously into his wife's therapy, to no avail. He even began to worry, superstitiously, that a ballet that he'd choreographed for a March of Dimes commission years earlier, in which a then-15-year-old Le Clercq danced the part of a polio victim and he, the Threat of Polio, might have actually caused the disease. Scarily prophetic, these scenes, superstitious or not.

Le Clercq and Balanchine remained married for 16 years. They divorced when dancer Suzanne Farrell entered the picture, although she and Balachine never married.

Le Clercq was wheelchair-bound and alone until her death at age 71. We see her living a full, productive life, teaching at the Dance Theatre of Harlem (using her hands and arms to demonstrate leg movements), and entertaining friends with her signature grace and charm in the backyard of her Connecticut home.

All was conducted without a trace of self-pity for a life on toe that ended way too soon, even for the time-stamped career of a ballerina.

Afternoon of a Faun: Tanaquil Le Clercq screens as part of the AFS Doc Nights on Wednesday, June 11, 7:30pm at the Marchesa Hall & Theatre. It's co-sponsored by Ballet Austin.