Taking the Temperature of 'Cold in July'

The film based on Joe Lansdale's novel, 'Cold in July,' is a gnarled tale of modern horror

When writer/director Jim Mickle started reading Joe Lansdale's novel Cold in July, he expected a by-the-numbers thriller. What he got, instead, pulled not just the rug, but the entire floor out from under him. Reflecting on the experience, Mickle recalls, "It seemed that every time it was set to hit its groove, it picked up and moved on to something new, plotwise and even genrewise. I started the book, finished it that night, hadn't even moved. I turned it over and said, 'How the hell did we get from this opening line to this ending?' I just wanted to make a movie that made me feel how this book made me feel."

His film adaptation of Cold in July is a writhing rattlesnake of Texas Gothic. In the movie, Richard Dane (Michael C. Hall) plays an East Texas picture-framer and family man, who becomes an accidental killer when he guns down a burglar in the night. No one seems too upset, save for the robber's father Ben Russell (Sam Shepard): A three-time loser himself, Ben aims to make up for having been a lousy father with an act of mindless vengeance. But the world isn't that easy, so Richard, Ben, and Ben's old friend, confidante, and slick-as-hair-grease P.I. friend, Jim Bob (Don Johnson), end up in a mess of cover-ups, tragedies, and gnarled father-son relationships.

Mickle and his longtime writing partner Nick Damici first gained critical traction with their debut feature together: 2006's Mulberry St. Then their sophomore effort – the post-apocalyptic vampire road trip Stake Land – put them at the vanguard of modern horror directors. Last year, they collaborated on We Are What We Are, a re-envisioning of Jorge Michel Grau's urban, Mexican, cannibal thriller Somos Lo Que Hay. When that film screened at Fantastic Fest last year (see "The Flesh and the Faith of 'We Are What We Are,'" Oct 12, 2013), Mickle recalls telling the producers, "'We aren't interested in doing a remake or translation, but [rather] if you let us do our take on it.' They said, 'Yes, that's what we want.'"

While their last movie was a free adaptation, swapping the Mexican slums for upstate New York, Mickle and Damici hoped fans of Grau's tale would recognize the shared sense of foreboding and dread. It's the same with Cold in July. Mickle says, "I hope people can read the original and feel like, wow, there's a whole other shade of this that also works, and these things don't step on each other."

It was a long, slow slog to bring Cold in July to the screen. He and Damici first found the book straight after Mulberry St.'s festival run, and its intimate feel – most of the story is a three-hander that takes place in either a car or a motel – appealed to their sensibilities more than most of the author's work. Mickle says that when you're looking at Lansdale's work, "you can rule out a lot of stuff off the bat. You've got so much period stuff, you've got sci-fi, you've got [B-movie homage] The Drive-In, with some pretty epic things going on." Cold in July, by comparison, "is definitely one of the most grounded of his books."

For an author with such a cult following, Lansdale's work hasn't had an easy road to the big or small screen. This is only the fourth adaptation of his work, after horror comedies Bubba Ho-Tep and Christmas With the Dead, and the survivalist teleplay Incident on and off a Mountain Road made for Showtime's Masters of Horror series. Not that Lansdale's upset. He's been known to joke that, if a project falls through after it's been optioned, he at least gets to keep the studio's check. When he wrote Cold in July, he wasn't thinking of it as film material. But then, Damici and Mickle were not the first people who tried to adapt it. Lans­dale recalls, "It was optioned about 1990, and for seven years I was hired to do a screenplay." When this version was being written, he remembers, "I looked at all the drafts except the very last one. They asked advice and took some of it, and didn't take some other. I felt very much part of the team."

Those drafts were sometimes painful. In a desperate attempt to stay loyal to the book, the 270-page novel became a 160-page script. (For reference, To Kill a Mockingbird is only 150.) That got slowly sliced down to the bare bones and gristle, but the winnowing process meant some characters fell into the supporting shadows. The first was the role of Richard's wife, Anne (Vinessa Shaw). "That was one of the elements it really killed me to have to lose," says Mickle, "because one of the fresh things about the book is that it isn't just a sausage fest." Finally, it was his longtime producer Linda Moran who convinced him to push Anne into the background. Mickle says, "She'd read every damn draft along the way, and as we got near to production, she said, 'You know, the beauty of this book is that you can read it in one sitting, and you just breeze through it.'" By comparison, she told them, "'The script has always been bloated, taking this novella and stretching it to an epic.' She was ruthless [and said] 'Cut, cut, cut.' It was the smartest thing we did."

Mickle credits his other big collaborator, Damici, for courageously killing off another of the novel's defining aspects: Richard's first-person narrative. That was tough, because inner monologue is one of Lansdale's trademarks. "In all of Joe's stuff, his writing and his narration is a character," observes Mickle. The filmmaker struggled to crowbar in a voiceover until, finally, his writing partner pointed out the obvious. "Nick said, 'Nah, let's lose that,' and rightly so."

Lansdale mourns that decision with a sly wink. "I do think a little something was lost when you lost the narration," the author said, "But I would. I'm the writer."

In those long years before Damici and Mickle finished their script, Lansdale had a few ideas of his own for casting, such as Hollywood stuntman-turned-actor Ben John­son, who died in 1996, as the taciturn Russell. But for Mickle, he always saw the rough-hewn Shepard as the raging, despairing father. Shepard had actually been sent the book before the scripting started, but it was only after several drafts and several years that he finally looked at the part. "I went to meet with him, practically wearing diapers," admitted Mickle, but meeting the acting legend was surprisingly smooth. "When he opened up the script, he just had pencil notes everywhere. He was directing it in his head, he was writing it, he was acting it. Within four seconds, I was like, 'He's going to do the movie.' It gave us a lot of confidence."

A tougher casting choice was Jim Bob. A hard-boiled private detective with the gladhanding charm of a used-car salesman, the sleazy charmer has appeared in several of Lansdale's books. So Mickle faced a near insurmountable casting problem: finding someone with "this amount of self-confidence and charisma, and this energy inside him that would be so annoying in anyone else, but just works with this guy." Lansdale had once considered wide-grinning musician-turned-actor Jerry Reed (who penned the famous "She Got the Goldmine (I Got the Shaft)") for the part. Yet it was Moran who solved the problem when she suggested Johnson. The Nash Bridges and Miami Vice star is undergoing an unexpected renaissance, and his performance as Big Daddy Bennett in Django Unchained convinced Mickle that he had the right man. They met at a hotel, and Mickle just laid it all out for Johnson. "I said, 'I need a guy who can come into a story that's already established itself but is at a crossroads dramatically, and I need a guy who's really the engine to get the film to the finish line.' And he gave me this smile and said, 'Well, you know, Jim, that is my specialty.'" 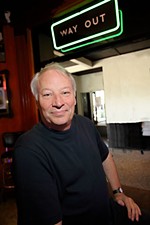 In the Thicket of It
Prolific Texan author Joe R. Lansdale is back with a hellish and hilarious new novel