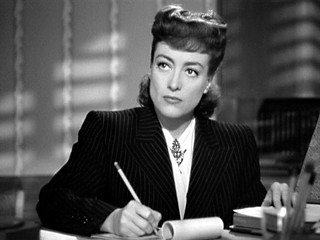 Joan Crawford made clawing out of the gutter an art form. By the time the San Antonio-born actress with the angular body and streetlamp eyes starred in Mildred Pierce, she'd been doing it onscreen for 20 years. But Mildred Pierce, a single mother who builds a successful chain of restaurants in the 1945 adaptation of James Cain's novel, was different. Other actresses her age, including Bette Davis, had turned down the role, but Crawford won an Oscar for her Mildred, draped in dignity and tasteful furs, her scrapping days over at last.

But there's a nasty little reflux of a daughter in the film who will never be content. It's hard not to see in Ann Blyth's venomous Veda a shadow of the old, hungry Crawford of the Twenties and Thirties, the gold-digging man-trap who looked ready to dismantle the world and everyone in it, piece by piece, to get her share. That Crawford, all spidery legs and big eyes, is at her best in the fantastically bitchy comedy, The Women. Adapted from Clare Boothe Luce's acrid stage play and directed by George Cukor with an all-female cast – not a single man appears on screen – The Women follows wealthy women from the beauty salon to the perfume counter to the ladies' room with anthropological spite.

Offstage, men are making the money and cheating on their wives with Crawford's brittle, lanky shopgirl, Crystal Allen. After all, someone has to work the perfume counter. "Look, what have you got to kick about?" she asks cheated-on Mary Haines, played by MGM's resident saint Norma Shearer. "You've got everything that matters – the name, the position, the money." When Shearer talks of love, Crawford snorts, "You noble wives and mothers bore the brains out of me," and the offscreen rivalry between them gives it a realistic zing. Crawford's a tall glass of something all right, but it ain't water.