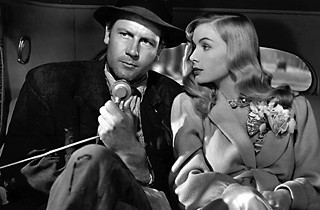 Lake Sure Drives a Movie Home

She'd already sparked attention with her peek-a-boo hairstyle in the war drama I Wanted Wings, but Preston Sturges' comedy Sullivan's Travels (1941) was the first starring role for the Brooklyn-born Veronica Lake. Brightening the screen opposite lead Joel McCrea, Lake's a cynosure of streetwise loveliness as her smooth way with the requisite wisecrack banter proves no less compelling than the cataract of wavy blond obscuring, occasionally, her right eye – as if that eye were not the lapis lazuli equal of its twin, and the platinum veil of hair worked the way her industry moniker (attached by a film producer named Hornblow) worked to obscure her birth name of Constance Ockelman, the way the more popular fictions captured in Hollywood's celluloid footage can obscure a less glamorous past of multiple divorces, a losing battle with booze, and a fizzled career that concluded with the low-budget horror film Flesh Feast in 1970, three years before Lake's death at 50.

But never mind that, kid. Here's some Forties-era social fantasy at its most enjoyable, with a bit of a message mixed with the mishegas. As the titular Hollywood director Sullivan remarks sometime after his Skid Row epiphany: "There's a lot to be said for making people laugh. Did you know that's all some people have? It isn't much, but it's better than nothing in this cockeyed caravan."