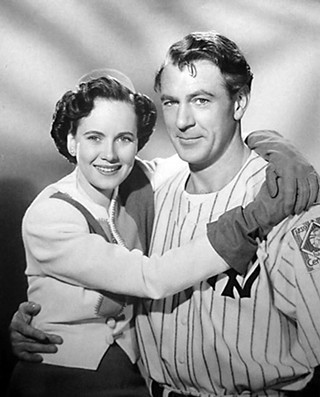 The Pride of the Yankees

Blond bombshells seduced Hollywood beginning in the silent era with Dolores Costello – Drew Barrymore's grandmother – but brunettes maybe never improved on violet-eyed Elizabeth Taylor. Central casting's girl next door rather than cat on a hot tin roof, Teresa Wright could almost pass for Taylor's baby sister. Sweet, slender, girlish, with a high forehead and perky nose, no one gave pained looks a better run for their frown lines. Great weeper, too. When The Pride of the Yankees turns its inevitable corner with 25 minutes left to go – slugger Lou Gehrig (Gary Cooper) stricken with amyotrophic lateral sclerosis (ALS) – Wright wrings trademark tears alongside her towering leading man and a mostly cornpone script by a pair of pros, Jo Swer­ling (It's a Wonderful Life) and Herman Mankiewicz (Citizen Kane). She makes it look easy. Debuting in William Wyler's 1941 adaptation of Little Foxes, the Harlem-born, Jersey-bred actress' next few films were that director's Mrs. Miniver, Sam Wood's The Pride of the Yankees, and the Alfred Hitchcock chiller Shadow of a Doubt. Three of those four gave Wright Academy Award recognition, including a Best Actress nod for Yankees, though she won Best Supporting Actress honors that same year for wartime drama Mrs. Miniver. In fact, Wright did her best work for Wyler opposite Dana Andrews – as well as Fredric March and Myrna Loy – in his 1946 Oscar sweep The Best Years of Our Lives. Extending into (somewhat) modern times with Somewhere in Time, Teresa Wright (1918-2005) would never be served as a tall glass of water by Tinseltown standards, but if this were reel life, she could wipe my brow any day.