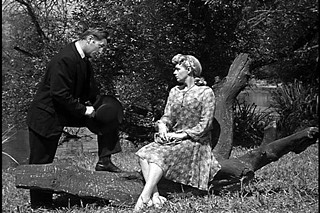 Night of the Hunter

'Bursts of Being a Lady'

It's  an inappropriate reaction, but I can't help laughing every time I watch The Night of the Hunter. Sure, there's those heavy-handed knuckle tattoos and the derailing lisp Sally Jane Bruce uses to say, "My name's Pearl." But those examples perversely add to the menace. Shelley Winters, sinking long before her character drowns, seems to thumb her nose at the very idea.

In the role of Willa Harper, Winters really only serves one purpose. Robert Mitchum made that explicit when he reportedly said, "The only bit she'll do convincingly is to float in the water with her throat cut." The gibe was at Winters' "blond bombshell" image, cultivated in noirs like The Raging Tide. Never mind her Oscar-nominated turn as a doomed factory worker in A Place in the Sun. When Night of the Hunter was released, Hollywood's interest in Winters was focused on her cleavage.

Mitchum was right. No one expected Winters to be realistic as Willa Harper. But there was nothing realistic in Night of the Hunter, anyway. As Willa, Winters turns an absurdly tragic character into a sly critique of cinema's tendency to use women as plot devices and props.

There's a wink in the way she delivers lines like "My whole body's just a-quiverin' with cleanness," as if she were wearing a spangled, strapless dress underneath a modest floral sack. Her death scene is rendered flatly, perhaps film's most subversive example of "faking it." Charles Laughton may have been directing expressionistic horror, but Winters was delivering camp.