An Actor and an Übermensch 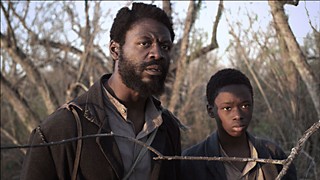 Tishuan Scott (l) with Ashton Sanders in The Retrieval

In the often thankless life of an actor, it's a long way from making $35 a week as a theatre performer to traveling the world as an ambassador for a multiple award-winning indie movie. But eight years after graduating with an MFA in acting from UCLA, that's the happy situation Tishuan Scott now finds himself in, as the face of The Retrieval, Texas writer/director Chris Eska's critically acclaimed second feature. The film, which is set on the outskirts of the American Civil War, had its world premiere at the 2013 South by Southwest Film Festival, where Scott won a jury prize for breakthrough performance; it opens theatrically in Austin on Friday.

Scott plays Nate, a freed slave-turned-gravedigger who is coaxed back south by a young African-American boy named Will and Will's duplicitous uncle Marcus on the orders of white bounty hunters searching for runaway slaves. At its heart, The Retrieval is about the psychological and emotional toll the institution of slavery took on everyone involved – the regret, betrayal, despair – and when Scott read the script, he knew he had to be involved.

"I couldn't believe my eyes when I was reading the script," Scott says. "I never saw anything like this in cinema. This was way before Django Unchained and two years before 12 Years a Slave. I saw it and thought, 'This story hasn't been told. It must be told. I have to be in this movie. I will be in the background if I need to be.'"

Scott is an actor with the soul of a philosopher, a social theorist, even a spiritualist, and while preparing for the role of Nate, he dove into the writings of his favorite authors to give his performance and the film a grander scope. He read W.E.B. Du Bois' The Souls of Black Folk ("Du Bois was the salvation of my life," Scott says) and the novels of Richard Wright. While browsing in a bookstore in one of the small East Texas towns the movie was being shot in, Scott came across a copy of William Styron's historical novel The Confessions of Nat Turner, about a slave revolt in Virginia, and found himself flush with a sense of serendipity and purpose. "I thought to myself, 'This is Nat; I'm playing Nate,'" he says. "'I have to get this book.'"

"I love Thus Spoke Zarathustra," he says. "The first time I read it I knew he wrote it for me and that he knew I would read it. I feel like I am a Zarathustra, a superman, an overman, an übermensch. It fit in perfectly with my understanding of history, of the travesties and travails of humanity. It's so clear: Man, humanity, must evolve, or we'll become extinct."

Scott found parallels between American slavery and Nietzsche's grand philosophies, particularly in the character of the Pale Criminal, a murderer and a thief. "The Pale Criminal comes to steal, kill, and destroy," he says. "The Pale Criminal wants to hide your shame, erase your history, your culture. He doesn't just want to kill you; he wants you to never have existed. Du Bois called this 'culling': You eradicate them and cause them to become extinct. That way people don't know their history; they can't find it."

Looked at in that light, The Retrieval is an apt title for a movie about the institution of American slavery – an attempt at reclaiming the darkest chapter of a beleaguered culture by acknowledging and accepting the darkness.

"We've gotten so wrapped up in calling Africans who were enlisted 'slaves,'" Scott says. "They weren't slaves. They were actually people who had a connection to a higher spiritual power before Christianity was forced upon them. They had their language stripped from them, their culture stripped from them – like the Pale Criminal aims to do. My hope is that The Retrieval will be part of a continuing attempt to keep our world and our universe moving in the right direction."

The Retrieval opens in Austin on Friday, May 2. See Film Listings for review. 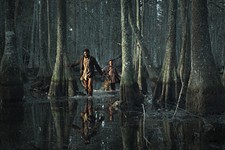