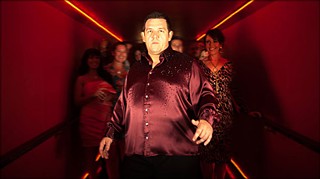 Nick Frost has a secret. He said, "I'd always wanted to do a dance film. A beautiful, Technicolor, Baz Luhrmann, rhinestones-and-silk dance film." Finally, with salsa-frenzy rom-com Cuban Fury, he gets his wish. As Bruce, the nebbishy engineering company salesman who finds passion in rhythm, he does something more daring than his own stunts – he does all his own dancing. But had nobody told him that Englishmen, with all their reserve and awkwardness, just don't dance? "I told me," he said. "I had the idea for five years. It kept popping into my mind, and I kept having to drive it back into the ether with a pitchfork because I didn't want to recognize that it was kind of a good idea."

Aside from being a dance film and a classic underdog tale, Cuban Fury is also an international romance, with Rashida Jones as Julia, the American fish out of water who becomes the object of Bruce's hip-swinging affections. It didn't start out that way. Frost said, "Originally, we were going to shoot this in Miami, and I was the Englishman amongst Americans, but then when we realized, hey, the budget's not going to stretch to that, we did it the other way round." Even with an American leading lady, Frost was determined not to pander to the U.S. market. He said, "I love that South African saying. The Afrikaners call European whites soutpiel, which means salt cock. Because you have one foot in Holland, one foot in South Africa, and your cock in the water, and that's the same thing with English people trying to make a film to please an American audience."

For audiences on either side of the Atlantic, Frost is most famous as Simon Pegg's comedic partner in Shaun of the Dead, Hot Fuzz, and The World's End. A foul-mouthed Oliver Hardy to Pegg's pensive Stan Laurel, Cuban Fury reinvents Frost as a leading man with feet of fire. It's unexpected, like suddenly realizing that John Belushi was a hell of a mover. Still, after a career making films generally by and for intercontinental Gen-X nerds, Cuban Fury exposes his lightning dance moves to a new audience. He said, "Rashida has that demographic that I don't have, and that's women. I have the bear market."

If Frost is Belushi, then Chris O'Dowd – the lanky Irishman from The IT Crowd and Girls – is his Dan Aykroyd. The pair met on the set of Richard Curtis' 2009 rock & roll period piece Pirate Radio, and Frost was determined to work with him again. "He was one of those blokes that you hang out with for a bit and think, 'Oh, we've been mates for years.'" Frost saw him as perfect for the lascivious, laddish Drew, the mean-spirited cockblock to Bruce's romantic intentions. "It's really horrible when you realize that he's not just a verbal bully, but he's a sexual pest as well, jabbing and stabbing at Bruce's bum." The affable O'Dowd had to unleash his creativity to come up with the requisite level of cruelty, and the semi-improvised scenes between Drew and Bruce – many involving O'Dowd punching his pal in the nuts – often resulted in Frost breaking character. "Him and me have the most outtakes from this film," Frost said. "I've got them on my phone, and if I'm traveling about and feel kind of lonely or sad, I'll watch outtakes of him eating a muffin basket."

After a Fashion
It's all about the give and take. And the swag.

The Future of Funny Has Already Happened
Welcome to 'Spaced,' the cult British comedy with 'Star Wars' in its eyes