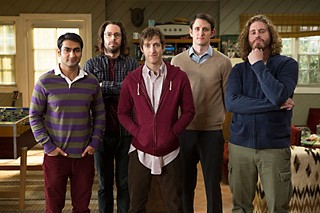 Little-known fact about Mike Judge: Before Beavis and Butt-Head, he programmed software for fighter jets. Now he's returning to the keyboard with tech comedy Silicon Valley.

As the hapless CEO of start-up Pied Piper, corporate drone Richard (Thomas Middleditch) finds himself caught between the tech sector's divergent instincts. After semi-accidentally developing an Internet holy grail – a lossless compression algorithm – he becomes the chew toy between two commercial titans: high-functioning obsessive Gavin Belson (played by Matt Ross as half Mark Cuban, half Emo Philips) and Peter Gregory (Christopher Evan Welch), a Steve Jobs-style merciless commercial genius. Richard wants to be the next Steve Wozniak, the computer idealist with a dream to change the world and his bank account.

Workplace comedies, especially tech-sector shows, have a rocky history. Silicon Valley isn't as scatologically hilarious as 8-bit animation Code Monkeys, nor does it have the sympathetic heart of the brilliant-but-canceled Better Off Ted. Yet producer/director Judge has a history of getting audiences invested, proven with his debut feature, Office Space. Much like Peter Gib­bons (Ron Living­ston) tried to escape cubicle life by just dropping out, Richard and his team see Pied Piper as their way out of the corporate grind.

As is often the case with Judge, it's unclear how much the pilot is laughing at or with its nerdy heroes. The interpersonal dynamic of the five questionable friends may be reminiscent of The Big Bang Theory, but there are traces of the amoral bleakness of an Entourage or Curb Your Enthusiasm (no surprise, since Judge's co-producer is longtime Larry David collaborator Alec Berg). There's more meat here than the surprisingly popular Theory – a show often savaged by its target audience as a nerd minstrel act. The real question for Silicon Valley is whether those same tech-sector viewers will find depth and accuracy in the depiction of broke developers dreaming of endless cash, or laugh at the virgin man-child developers and Asperger's gags.