Shadow on the Ground

Matt Muir's 'Thank You a Lot' tackles the tensions of performance 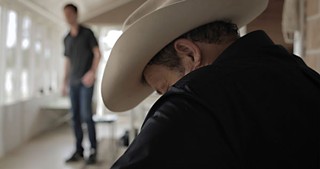 Before local filmmaker Matt Muir even knew that James Hand was either able or willing to act in his debut feature, Thank You a Lot, he had written the enigmatic, somewhat reclusive country songwriter into a lead role in his script by name.

"He's just so compelling and unusual and has such an interesting energy that you just wouldn't expect, an old-school honky-tonk guy that's not like an homage or quirkiness," laughs Muir, sitting on the couch in the office of his production company, Revelator, which he runs with the film's producer, Chris Ohlson.

"I talked to his manager, and I totally lied, said, 'I have this script I've written and this one part that I think would kind of be good for James, that he'd fit the role and maybe be good at it. Do you think he'd be interested in being in a movie?'" Muir confesses. "So I printed out a copy of the script and gave it to him, and of course the character is named James Hand and singing James Hand songs. But he just never brought it up. I was going to change the name for a while, because it's of course a fictionalized version of James Hand, but he said, 'Whatever you want to do.'"

Prior to Hand's role being written into the script, Muir's film focused on a seemingly unscrupulous music manager (Jack Hand, played with antihero, underdog perfection by Blake DeLong) hustling through the contemporary Austin music scene managing tensions with both his artists and his corporate company. The introduction of Hand as his estranged father, a reluctant country artist choked by his own failures and mistakes, provided a new depth and hefty emotional substance to the film.

"I feel like a lot of films – especially if it's the indie rock scene – they're trying to be cool, but no one really cares," Muir says. "And that story wasn't the heart of the movie, that wasn't there yet. But you put James there, and you have some compelling stuff going on, and you just want to know about him – where his energy comes from and what motivates him. So the movie went in a different direction."

Hand presents both a counter and complement to his son's fake-it-till-you-make-it determination, exposing the insecurities and fears passed down generationally that Jack fights against as he navigates between the fluorescent-lit, high-rise offices and the grungy back alleys of Austin's club scene.

When Jack's boss gives him an ultimatum to either sign his father to the management company or be fired, it launches a journey scarred with long-covered wounds and familial regrets. At his father's house, Jack also finds a documentary filmmaker, Allison (Robyn Rikoon), camped out while working on a film about Hand. Importantly, the interspersed interview footage allows Muir to work the songwriter's own notoriously harrowing and heartbreaking words (see "Where the Shadows Are Deepest," Music, May 5, 2000) into the script.

"I technically scripted [Hand's lines], but a lot of it I just pulled from things that he said to me, or things that I read about him," Muir acknowledges. "I met him, and just started reading all the Chronicle articles about him. The loneliness and his fear and the kind of weariness that he just brings along and the fact that he came to the public eye after so long but had been playing in public since he was, like, 11. So much of that informed it, and it was just stuff that he had already said."

Hand's recollections for Allison's documentary in the film, though ripped with an authenticity of the songwriter's real-life regrets and anxiety, heightens the film's almost meta exploration of performance.

From the opening scene of Hand running through his stage banter to an empty field, to the ambiguous closing moment of Jack leaning against the Mohawk's brick wall solemnly (or determinedly) smoking a cigarette, Thank You a Lot suggests we're all playing roles, casting ourselves against our fears and insecurities and incongruences between how we see ourselves and how we present ourselves to the world.

"To me there are kind of two ideas about performance in the movie," offers Muir. "Jack doesn't really stand back and appreciate what it's like to be an artist and performer and to create something and play it publicly. I don't think he's analyzed that aspect of their lives before he puts them in certain positions.

"Then the other thing that he may not realize is that he is a bit of a performer, and we wanted to draw that line between him and his dad," Muir continues. "But I don't think he really understands that either. He has his own way of performing. I think there are a lot of people that wouldn't consider themselves creative, but in their business or their job they have to put on a performance."

Thank You a Lot