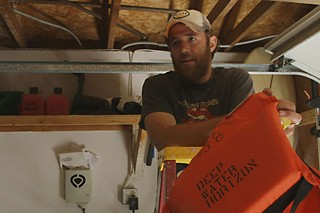 "Why is the Gulf open?" asks a local fisherman/shrimper, holding up a bag of freshly caught Gulf shrimp, the color of which is off-putting, to say the least. Folks along the Gulf of Mexico may enjoy "blackened" cuisine, but not dripping black, and the discharge from this thawing crustacean is definitely not appetizing.

The fisherman's neighbor, Roosevelt Harris, a volunteer at Hemley Church's food pantry in Bayou La Batre, Ala., is there informing folks affected by the BP oil spill about an upcoming community meeting with an attorney handling claims. Harris is like a black Paul Revere, driving through the area the locals call Hardluck City, encouraging people to get their share of the settlement. Most live in rundown trailers, school buses, or boats festooned with Confederate flags and commiserate with Harris but, in the end, avoid the meeting.

When Transocean's Deepwater Horizon, striding the second-biggest oil reserve in the U.S., exploded on April 20, 2010, and began a five-month gush of crude oil, it not only threatened the livelihood of so many Gulf Coasters, it destroyed lives – 11 men died on-site that day.

Filmmaker Margaret Brown grew up in Mobile, Ala., spending summers along Mobile and Perdido bays. "The water's inextricable to life on coastal Alabama." The Austin-based director (Be Here to Love Me, The Order of Myths) brought her cameras home to grasp the impact of this man-made disaster.

"We're connected to this invisible factory under the Gulf of Mexico," says Brown of the more than 3,500 platforms (each connected to as many as 20 wells) in the Gulf. An animated sequence in the film deftly illustrates this, using Deepwater Horizon as a centerpoint and splashing a rash of tiny red dots to indicate each platform – like a nasty case of Gulf measles.

"We don't think about where the oil we put in our cars comes from," she says. "It's hidden from us, partly because we live comfortable lives and partly because there's an agenda to keep it hidden." Brown learned this firsthand while soliciting subjects for The Great Invisible. "Many ... settled [financially], signed nondisclosure agreements. There's a cone of silence."

Despite frustrations, she spent three years convincing people to go on the record with their Gulf-tragedy realities: people like food-pantry volunteer Harris, like two Transocean employees who witnessed and survived the blast and who have the brutal pangs of PTSD to show for it, like the father who lost a son and testified in front of the U.S. House subcommittee.

"It was hard," she says; a lot of these folks have "been hounded. One of them thought I was a spy from Transocean." Her search across the Gulf led her to Houston, where she connected with leaders in the oil industry and scored interviews with heavyweights like Bob Cavnar, Texas energy industry vet and author of the book Disaster on the Horizon, and Kenneth Feinberg, the third-party attorney brought in to handle settlements.

In two surprising scenes, a roundtable of oil executives speak candidly, even giddily about the industry they have done well by – one they see as in a renaissance. "Energy has been cheap in the U.S. for the last 100 years," says one captain of industry as puffs of cigar smoke drift into the air. "Americans think it's a birthright," another says against the clink of ice in a glass. "I don't think people realize how lucky we are."

Brown insists on not villainizing the men willing to talk on camera. "Those guys are all independents. They don't work for huge companies like BP, Exxon, Transocean. If they did, they would have never talked to me. We tried to talk to the majors, and no one would ever talk.

"These are people who trust me now," she says. "I told them, 'Your perspective is not one that people hear, and I'm interested in that perspective. The oil industry doesn't talk. Will you?' And they wanted to."

Ultimately, "we're all complicit," Brown argues. "I'm sitting here using a plastic glass that's made out of petroleum by-products right now ... and I just spent the last four years making a film about this. Clearly, we're all hypocrites. I think we all have to come together, all of us hypocrites, and figure out a way to make this shit better. It's not about pointing fingers."