The Future of Food Is Now

From drones to cricket flour to apps designed to make food deserts extinct, social justice is at the intersection of food and technology 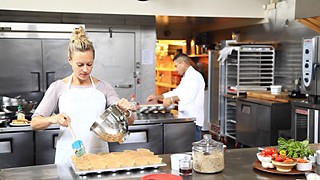 Foams are cute. A dish featuring antelope served nine ways is innovative. But while many of us are getting fat off of what emerges from the imaginations of our favorite chefs, we are increasingly outnumbered by those who not only don't have access to haute cuisine, but have little access to much cuisine at all. Even as you read this, no matter where you are, there is someone not far from you who won't get enough to eat today. This is a problem many members of the tech industry want to rectify, starting at the farm and ending at the plate.

The first step, argues Dr. Dev Shrestha, associate professor of agriculture at the University of Idaho, is to incorporate robotics into the work of farming. Shrestha, along with a panel of agriculture journalists and digital technology experts, will pose the question "Can Robots Feed the World?" in their panel. The answer may be yes: Through the use of drones, farmers can apply fungicides and pesticides with more precision to their crops, as well as use wearable technology to collect and analyze data related to weather and soil conditions. In addition to added benefits to the environment by precision-applied chemicals and increased crop yields through the use of robotically sourced data, Shrestha believes that this technology will attract younger generations to farming. "The average age of a farmer today is 56," he says. "The new kids view agriculture as labor-intensive, not lucrative, and mundane. With these new technologies, there is a much higher interest in agriculture among the younger generations." Incorporating robotic technology into agriculture not only helps generate more food for hungry people, it also ensures the longevity of the small-farm industry.

Moving from the Midwest to Silicon Val­ley, another kind of small farm comes into focus: cricket farms. Entomophagy (eating bugs) is a hot topic these days, especially as we face the harsh reality of a global population of 9 billion people by 2050. That many people requires a lot of grub, and according to the panelists of "Hacking Meat: Why Insects Are the Future of Food," the answer lies in grubs. And ants. And crickets.

"Basically, what we are talking about is disrupting the food system," says panelist Megan Miller. The former pastry chef, organic farmer, and digital editor now runs Bitty Foods, a start-up dedicated to developing baking mixes made with cricket flour. "This is an area of disruption where we can use some of the same innovation principles that we've been using for software to solve a much larger problem, which is how to feed people. We're using some of the principles of rapid prototyping and iterative development that we used in software to be able to iterate quickly and solve some of the logistical problems of bringing insects into the food system."

You might think that, given the high ick factor, Americans wouldn't be interested in eating bugs apart from taking high-stakes dares or being Andrew Zimmern. But you'd be wrong, especially when chocolate-chip cookies are involved. "When I started this company a year and a half ago, I thought I was going to have to make a huge investment in marketing and branding," says Miller. "But so far, anecdotally, I'm pushing off demand more than I'm trying to create it." Be on the lookout for opportunities to taste bug-based foods – which, by the way, are gluten-free and fit quite nicely into the paleo diet – during SXSW Interactive.

But what about those folks who aren't so much concerned with cricket-flour muffins or the paleo diet and are instead faced with the daily challenge of access to food that doesn't come in a wrapper or isn't dusted with nuclear-orange cheese powder? That's where Kel Smith comes in. He founded Anikto, a company dedicated to finding ways to use technology to remove barriers separating people from basic needs.

Smith, who will talk on "Pixels, Plows & Personas: The UX of Food Deserts," developed the Aisle Won app, which is designed to connect people in food deserts with fresh, healthy food. The app, which was unveiled at SXSW Interactive last year, emerged from Smith's research into the demographics of mobile technology adaptation, but not without a few false starts.

"I thought, 'There must be some way to develop a smartphone app specific to those populations and connect them [to] sources of healthy, affordable food and that might solve the problem, join the social trend with the technology trend, and get a good result,'" he explains. "I tried that. It failed miserably because I did not take into account that how people acquire and consume food in Baltimore is very different than how they consume food in New Orleans, San Francisco, and Austin.

"We think we're just going to drop a grocery store into the middle of a food desert and that's going to solve all the problems, but it's not necessarily all it's going to take. You have to take into account the social and cultural attitudes of a community. Listening and asking a lot of questions is a better way to approach this innovation space, rather than thinking of technology as a big blanket that will fix everything by itself."

Lack of access to food takes many different forms, as the sheer number of panels dedicated to this very problem can attest. The answers are varied and, it seems, solutions are nigh.