O Death, Here Is Thy Sting

Leveraging a scorpion's deadly synergy in the battle against cancer 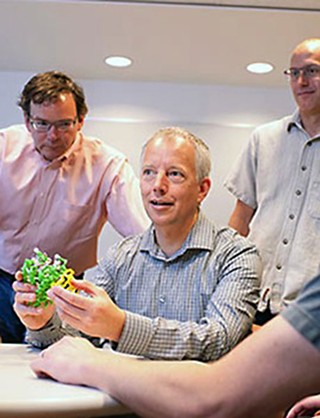 Jim Olson (center) and his team

How odd (or maybe appropriate), then, that when you're looking for a way to combat cancerous tumors that occur beyond the human blood-brain barrier, it turns out that your best bet may lie within the venom of Israel's Deathstalker scorpion.

That's what pediatric neurosurgeon and cancer researcher Jim Olson and his team (of humans and scorpions, we imagine) have been developing: the peptide chlorotoxin, part of the chemical cocktail that makes the Deathstalker such a dangerous creature, that can be used to smuggle luminescent molecules past the brain's meticulously guarded border and then selectively bind those molecules to cancer cells – and only cancer cells.

This means that, when you've opened up a living skull and are scalpeling around in somebody's delicate gray matter, trying to excise the diseased parts and leave the healthy parts intact, you're not just making best guesses based on what might be discernible on the recent MRI image displayed nearby. It means, instead, that every bit of compromised cerebral pudding that needs to be removed is conveniently glowing for you.

You don't need to be a neurosurgeon to realize how helpful – how much of a literal life-saver – this could be.

"Scorpions have been evolving over millions of years to make a drug that can get into the brain and paralyze the victim," Olson said during a lecture at 2013's PopTech convention. After adding a decade's worth of human-based chemical fine-tuning to evolution's busy millennia, Olson calls the de-weaponized, cancer-targeting result Tumor Paint; and the stuff's been doing that whole with-flying-colors thing in clinical trials. It's also proving effective in "painting" prostate, breast, colon, skin, and other cancers.

How is this accomplished? And how is all this fierce industry being paid for? Olson, co-founder of the crowdfunded research initiative Project Violet, will be at SXSW Interactive this year to explain the techno-medical processes and the Internet-enabled promise of what he calls "citizen science."

Note: We're not certain, at press time, if the good doctor will be bringing any actual Deathstalkers with him for demonstration, but we wouldn't rule that out entirely. Because, hey, it's South by Southwest.