How to Run a Very Successful Crowdfunding Scam

Or epically fail at launching a tech product

Below, a prototype of the Instacube, for which Savannah Peterson (above) was charged with doing PR

The average Instagram user spends more than four hours a month looking at their friends' photos, so it's no surprise that a Kickstarter campaign promising to stream those photos into a digital picture frame would be a hit.

The product is Design to Matter's Instacube. When it launched on Kickstarter, the tech blogs went wild, backers tripled the donation goal to the tune of a whopping $621,000, and Savannah Peterson, head of "PR and hustle," worked so hard on the project that she closed the campaign from the emergency room with a failing kidney.

But nearly a year after the product's promised ship date, only a handful of beta-testers have actually seen the Instacube, making for 3,000-plus very unhappy donors, whose constant stream of vitriol has led to the resignation of both Peterson and the chief product designer, and forced Peterson to deactivate her voicemail due to a barrage of hateful messages.

Peterson is sharing her story for the first time at SXSW in the panel "I Ran an Extremely Successful Crowdfunding Scam." The scintillating title implies escaping into anonymity with suitcases full of pledge dollars, but the reality is less Catch Me if You Can and more Catch-22.

"At no point was it ever intended to be a scam, but when you've put money behind a project and the communication has been ambiguous, it makes it hard not to feel like you've been scammed," says Peterson.

So where did the money go? Confi­den­ti­al­ity agreements keep Peterson from going too in-depth, but as Design to Matter realized the potential of the product, they spun it into a new company full of bureaucratic pitfalls and snowballing development costs. Other unexpected setbacks included a last-minute back-out by the factory in China and a worldwide shortage of LCD screens.

"The money was used for development; it went where they claimed," says Peterson. "But if the company was run in true start-up fashion, an eating-ramen-style situation, the Instacube would've made it." 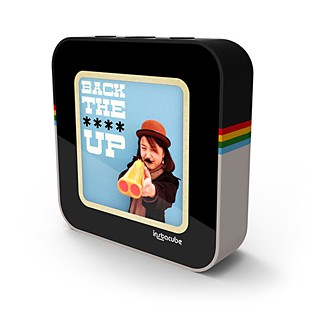 The latest stats from Kickstarter state that 44% of campaigns reach their goal, but there are no numbers on those that fail to fulfill their promises. Peterson says that 78% of funded tech products ship late, but she only knows of one instance of a blatant scam: a pair of video-recording eyeglasses called ZionEyez, whose creators have completely disappeared. Sadly, Kickstarter's terms of service offer backers little to no recourse, and there's yet to be a big enough case to warrant a class-action suit.

Although most online shoppers know a bogus vendor when they see one, in the sphere of crowdfunding, even those with the best intentions can sometimes fail to deliver. One of the goals of Peterson's SXSW appearance is to help show consumers how to identify unrealistic projects. "I'm not trying to smear the company I used to work for," she says. "The panel is mainly about educating people about the hardware development cycle, the problems of bringing something to market, and then letting people know when you should put your money into something."

One of the most important things to watch for is whether the company actually has a working prototype. If you don't see a video of someone interacting with the gadget or read a media report of a journalist testing it, then it's likely that the product is still in the very early stages. To help curb this pre-prototype promotion, Kickstarter has disallowed the use of renderings as primary campaign images, but be wary of anyone who makes computer models a big part of their presentation.

Another red flag has to do with how much money the creators are asking for. Consumer electronics companies spend enormous amounts of money to bring products to market, and while bootstrappers can often do so at a fraction of the cost, there's still a ton of money involved. Between design costs, injection molding the physical body, manufacturing the chips, and paying a staff competitive tech industry salaries, the overhead is huge, and any unexpected production problem can cripple a project. "If what you're looking at has a computer chip inside, the person should probably be asking for $500,000," says Peterson.

The lessons learned from Instacube's exorbitantly pricey path to market have led Peterson to join Shapeways, a company that connects scrappy entrepreneurs with cost-effective 3-D printing. It aims to be the Etsy of the 3-D printing world by serving as both a manufacturing hub and a marketplace for completed goods ranging from jewelry to robotics. Most vendors on the site have spent less than $1,000 to start their businesses.

As for the Instacube, the latest updates from the development team claim that the beta testing is going smoothly and that the product could ship by the second quarter of 2014, but backers are still leaving daily comments accusing the company of being a scam. Peterson does believe that donors will eventually receive their Instacubes, but until people actually have the products in their hands, don't expect to be able to leave her a voicemail.