Adam Savage on the human capacity for knowledge 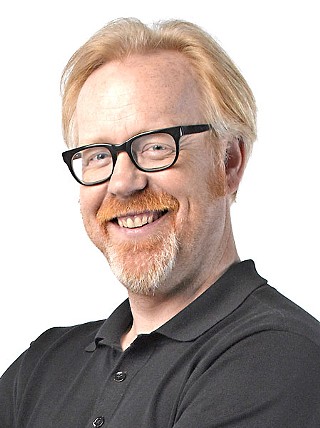 How does the most witty and reputable problem-solver on TV stay focused while filming three storylines and sorting through a thousand different details each week? Evernote. That's right, the unconscionably intelligent Adam Savage uses an iOS organizational app just like you and me, and writes down every menial chore from "Get the eggs" to "Debunk that myth that's been riddling society since 1759."

"The fact that I can access it on my iPad, iPhone, or any computer I have access to radically increases my ability to update and keep current with the information I've been updating," he says.

Call it a second brain.

Much of Savage's need for such a tool derives entirely from his affinity for sorting out a series of suppositions at once. As co-host of the Discovery Channel's MythBust­ers, he's acutely aware of the human race's capacity for knowledge and the necessity to incorporate external resources for added judiciousness where necessary. We spoke with Savage about what we as humans are completely capable of – and where we need some help.

Austin Chronicle: How much can the human brain carefully consider at once?

Adam Savage: Only one thing at a time. The trick is being able to switch gears. As I get older – I'm breathing down the neck of 50 years old – I need more infrastructure to help me shift gears. That means I do a lot more writing now than I used to, simply because I'm working on more projects and telling more elaborate stories. I need to review my notes a lot more often in order to make sure that I'm telling the stories the way I want.

AC: Is it safe to assume that you are regularly considering a truly awesome amount of things?

AS: That is commensurate with always thinking about how to tell a story about each thing through science. We're filming three stories this week, which is semi-common. The real challenge is always to finish by the end of the day, make sure you've told a reasonable story, make sure you've got all the clarity so that the audience knows what's going on, and make sure to keep it fresh. I've started to go out on set with a list of things I want to get from myself in terms of pieces to go on camera and bits of the story. At the end of the day, it's never what I'd planned for at the beginning of the day, but it's roughly analogous.

AC: If I'm sitting on my couch and a curiosity pops into my head and I go to my phone to try to sort the curiosity out, is that a sufficient method for retaining information?

AS: I think it changes as you get older. I've been looking at studies that point out how the trope of older people forgetting things more often is actually just that their brains are packed with way more information. I took that to heart to start to write stuff down. If what you're asking is the difference between research and trying something out, Jamie [Hyneman, Savage's co-host on MythBusters] and I are massive adherents to the Get Your Hands Dirty school. You can read about the hardness of metals all you want, but until you've turned a hacksaw into a lock spring, you really don't understand it.

AC: Your show is based on the fact that humans are prone to certain superstitions, or at the very least, to accepting facts based on little to no evidence. Have we grown too gullible? Is gullibility even that bad a trait?

AS: One of the reasons that theories and facts get propagated is because humans are natural storytellers and story receivers. It is absolutely inherent in our genetics to tell stories and parse the world with stories. Saying "that rock is hard" isn't as visceral as getting hit in the head with that rock. When we encounter a story that's counterintuitive in an entertaining way, it tends to stick with us. Or if it helps to parse the world in a way we already expect it, biases kick in and we don't necessarily end up looking for evidence. But I think the proclivity isn't necessarily a need to believe in stuff without evidence. It's a need to have a good story to go with the intuition.

The second part of that is believing in stories despite evidence to the contrary. That's the problem. I still think it's a relatively small faction of humans who believe ridiculous things despite evidence to the contrary, but they can be very dangerous. You can't go around believing the world is 6,000 years old and then go get into an airplane and fly. The same types of investigation that have allowed us to understand that the age of the world is 4.5 billion years is exactly the line of investigation that allows us to inflate an aluminum bubble and fly it across the sky. These things are not mutually exclusive, and you cannot cherry-pick your science.