Already gearing up for the SXSW Gaming Expo coming March 7-9? Well, this year you have even more to look forward to, as the SXSW Gaming Awards show has revealed its hosts and nominees. YouTube sensations iJustine and the duo behind Smosh will handle emcee duties at the Long Center. The nominees range from AAA titles like The Last of Us to indie fare like Gone Home. Several local studios are also up for the Texas Arts Achievement Award, from the Bioware behemoth to the two-man team of Galactic Cafe. While you're at the Gaming Expo, make sure to play the nominees for the Gamer's Voice Award and vote for your favorite. Locals nominated for that award include SuperChop Games' Ephemerid, Breadbros Games' Sully: A Very Serious RPG, and Swagabyte Games' Disorder. See the complete list of nominees – as well as our ongoing dispatches from the Expo – online at austinchronicle.com.

The team behind Waking Mars has been hard at work on its sequel to Spider: The Secret of Bryce Manor. This time our intrepid arachnid will unwittingly explore the Rite of the Shrouded Moon while single-mindedly capturing various insects in its web. At the most recent Juegos Rancheros meetup, the team introduced the origins of the game's mystery and showed off the gameplay. While you wait for the completed game, follow Tiger Style on Tumblr, Twitter, Facebook, and Instagram to get more hints about the mysteries that await you.

Team Chaos has been busy. Even after releasing Dragon Academy and Dragon Trials within the last few months, they've managed to revamp their website and expand out of dragon territory. Their most recent title, Enigmo: Explore, involves concocting increasingly complex machines to complete levels. Position and utilize tools (and science!) to make as simple or as Byzantine a contraption as you like. Add to that the impending release of a Flappy Bird homage that involves a mustache trying its best to avoid trimmers and another game that will apparently have something to do with a cat. That's a pretty good start. 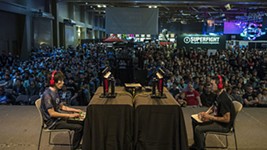