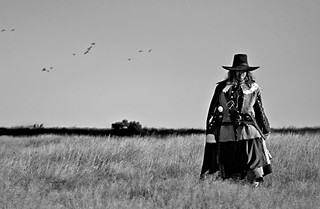 Period dramas are expensive. There are costumes and props and sets and horses and cannons – even the shovels need to be historically accurate. No one tell that to Ben Wheatley, the alchemist behind British 17th century historical horror and Drafthouse Films' latest release A Field in England. He made it because it was the easiest project on his slate.

The irony is that it was supposed to be a stopgap. After the success of his spree killer comedy Sightseers, he said, "We were looking at doing some stuff that's more big and expensive and increasingly mainstream." He realized that meant potentially two years of preproduction, and he started getting itchy for the run-and-gun pleasures of true indie filmmaking, as epitomized by his 2009 microbudget debut. "The main message of Down Terrace was no one can stop you making films. I have to do this, because this is my credo. I've been talking about this; I can do this."

The foppish and fearful Whitehead (Reece Shearsmith) has been dispatched by his master into the scalding cauldron of war to track down O'Neill, a mysterious Irishman (played with sneering fury by Kill List's Michael Smiley) who has stolen certain documents from him. There's no nobility or honor in this war: The tale begins with Whitehead tumbling through a hedge, fleeing battle, and discovering two corpse-pilfering deserters, Jacob (Peter Ferdinando) and Friend (Richard Glover, star of Sightseers). They are offered food and beer by the amiable Cutler (Ryan Pope) in return for one small favor: Pull a rope in the middle of the field. Yet something seems awry: Is it just the unusual mushrooms in Cutler's stew, or are there darker forces at play?

Field is set during the English Civil War, the nine-year conflict starting in 1642 as a power struggle between King Charles I and his Parliament. But ultimately, the English Civil War was no simple struggle for democracy against monarchy: King Charles was a tyrant, but the Parliamentarians, under Oliver Cromwell, cut their own gory swath across the British Isles. "There's no heroes," said Wheatley. "Everyone's a villain." That's made the conflict a difficult subject matter for many filmmakers to date. "Cromwell goes off to Ireland and causes all kinds of carnage, and that can't really be balanced, you can't have him as a hero. Obviously, Britain is in the grip of monarchy, so it's accidentally a heroic story about killing a king. It just doesn't quite fit; it doesn't make sense."

Historians estimate that between 30,000 and 50,000 people died in the English Civil War. That number may not sound like much after the blood-soaked 20th century, but in a nation of around 5 million, when guns and bombs were an oddity, each death was a hacking, scarring, brutal act of hand-to-hand butchery. Conflicts would run the fine line between tragedy and farce, like Charles' disastrous siege of the French fortress of Saint-Martin-de-Ré in 1627. "They all run forward, put the ladders up, and all the ladders were eight feet too short. So all the soldiers got to the top and went, 'Oh, fuck,' and got killed. That's what started the conversation about what an incompetent tit the king was and how much money it had cost."

Wheatley's films pick at the scabs on the British psyche. His Down Terrace, shot on a microbudget in just over a week, dissected the madness and violence in the family dynamic of English gangsters. Similarly, 2013's blood and scones satire Sightseers was Badlands with sweaters and a nice cup of tea. But Field returns to the madness of war, a theme he touched upon with his mercenary pagan rampage Kill List. In an unexpected turn, he will direct the first two episodes of Peter Capaldi's tenure as the new Doctor Who – a gig he got in part because Field catapulted him from indie success to a major force in British cinema. Channel 4, the film's UK distributor, had so much faith in it that they launched it in theatres, on demand, on DVD, and on free-to-air TV on the same day.

Painting his story on a small canvas didn't mean he was prepared to cut corners. During the writing process, Wheatley and longtime scriptwriting partner Amy Jump researched the era heavily, ensuring historical accuracy without turning the project into a thesis. Wheatley said, "Amy was really conscious in the script to comb out things you could get caught up." That's why there's the unstated significance of having the Belfast-born (and longtime Wheatley ally) Smiley as the malevolent O'Neill, since Cromwell's army laid waste to the rebellious Royalists of the Irish Catholic Confederation. "I don't like people doing accents or suppressing their accents," said Wheatley. Yet he had to research to find proof that an Irishman would have been part of the conflict on the mainland. He needn't have worried. "They were about the only soldiers during that period who had any combat experience."

Importantly, there's no specific time, date, or location given. "There was one press release early on in the process that put some of that shit down, but we got rid of that with everything that went out later, because it's not that important. The last thing we wanted to do was get crucified by historians."

Wheatley's concept – five men, trapped in a seemingly endless swath of grass, mud, and nettles – also helped strip back on the usual expense associated with period films. Even the costumes didn't break his meager bank. In 2008, Channel 4 had produced a Civil War epic, The Devil's Whore, and all the uniforms were in storage at London's legendary Angels the Costumiers. Wheatley said, "You'd just go down there and you'd get your choice of 1,600 costumes." Since all the characters are near-destitute, deserters, criminals, or cutthroats, and the events take place across one afternoon, he added, "No one changes their clothes, so you only have to get costumes for five guys."

Of those five, Shearsmith, as the simpering Whitehead, is likely new to most American audiences. His most recognizable role on this side of the Atlantic may be as Dexter, the pencil-mustached weekend robo-warrior of cult comedy Spaced. Yet in the UK he is a comedy icon for the darkly surreal ensemble nightmare The League of Gentlemen, appearing alongside future Doctor Who writer and Sherlock star Mark Gattis. It was his ability to create dozens of distinctive and disturbing characters that convinced Wheatley that he was "fucking great. ... He had that weird ability that De Niro had to sink into those characters, from Mean Streets to Raging Bull. I didn't know he was that guy; it was just the mole that gave it away. His range is huge, and he could do whatever he wanted." There was something distinctly English about the hiring process. "We had a few cups of tea and a chat, and I went back to Amy Jump. She's a big fan and said, 'We'll write something for Reece.'"

Like League, Field finds strange horrors in the rolling hills of England. But don't get distracted by the psychedelic visuals. Following in the hoofed footprints of Seventies British supernatural horror (Wheatley screened Ken Russell's 1971 historical shocker The Devils at Fantastic Fest and cited it as a guiding inspirations), Field is set centuries before anyone tuned in or dropped out, before the Age of Reason. This is an era when science, sorcery, religion, and politics were one and the same, and all are subject to ill fortune. Wheatley explained, "I think they would be religious in a way we could not possibly comprehend. Around that time there's stuff about holy water that could be used on sheep and about blessing the crops. It got really complicated and convoluted, and people were ready to believe anything." Yet he's not prepared to write the era's yeomans and peasants off as blind zealots, ready to be butchered for God and country. "A lot of people would just get into battle and go, 'Fuck this' and walk off. People were radical, and thinking in a much broader sense than people give them credit for."

A Field in England opens Feb. 7 at the Alamo Slaughter Lane, with special screenings at the Alamo Lakeline. See Film Listings for review and showtimes. 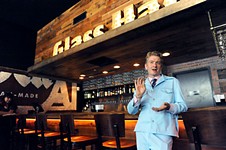