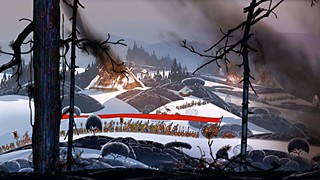 
If anyone deserves to write the book on making a video game in the age of crowdfunding, it's Stoic. The three-man team of industry veterans ran a flawless Kickstarter campaign back in spring 2012, raising more than seven times the $100,000 they were asking. The additional funds were a blessing and a curse. A little fiscal padding to protect against unforeseen bumps in the road is nice, but the additional $600,000 meant additional expectations. Instead of tacking on unnecessary frippery to their game about spartan Vikings in a stark fictional land, Stoic smartly paid luminaries to bolster the game's art and sound.

The work of Powerhouse Animation and Grammy-nominated composer Austin Wintory added layers of artistic depth to the polished final product, but it also served to keep eyes on the game throughout development. The release of the free-to-play multiplayer mode, The Banner Saga: Factions, in February of last year kept backers pleased with the game's progress. And, in the weeks leading up to this month's release, screenshots and footage from the game revealed stunning, hand-drawn landscapes and character rotoscoping (think early Disney movies like Snow White).

The only thing left was to play the game itself.

You begin your journey in a Viking land where humans and the oversized and horned Varl live in tentative peace after battling back the robot-esque hordes of Dredge. The sun has stalled in the sky, bringing eternal, cold daylight just as the Dredge have mysteriously returned. As you travel to keep ahead of the encroaching baddies, things quickly grow bleak. Forced to make difficult choices about whom to take into battle and whom to trust, players must balance supplies and the morale of the caravan. What seem like good decisions can come back to haunt you, but it only makes the journey feel more personal.

Battles take the form of turn-based challenges, pitting your cunning against your enemy's. If you haven't played Factions, these take time to master even on the easiest difficulty setting. Things get increasingly complicated as skirmishes grow in scope and you lead entire armies onto the battlefield. After making a few decisions about the nature of your army's attack, players are greeted by the same grid-based battlefield they've come to know. However, this time your losses and victories are expanded to your caravan as a whole, thinning your ranks.

Strategy games aren't known for their accessibility, and The Banner Saga is no different. Don't let the majestic art design and rousing score fool you. Mistakes on the battlefield are dealt with severely. But these relentless struggles only make hard-won victories all the more sweet.

Stoic has expertly navigated the Wild West of crowdfunding and come out the other side with a product that looks and plays like a much bigger studio made it. Let's hope other studios were taking notes. 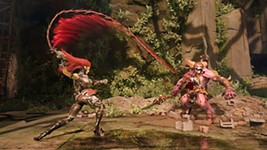