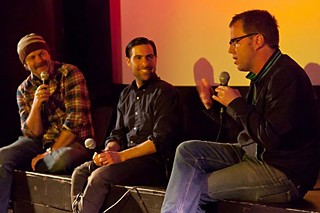 Somebody down here likes Austin.

After celebrating the Austin release of his fifth feature, Somebody Up There Likes Me, at the Violet Crown Cinema last April, writer/director Bob Byington will bring the spotlight back to his hometown to shoot his next feature – Seven Chinese Brothers – here in February and March. Better still: He's bringing Jason Schwartzman, too.

Seven Chinese Brothers has been a long time coming. At the time of the release of Harmony & Me in 2009, Byington told the Examiner that he'd written the script in May 2001. For a time, it was even slated to begin filming in town in 2010, starring Tunde Adebimpe (Rachel Getting Married). The cast has changed, the timeline has slid, but the story remains the same: "a comedy about taking the easy way out." Between the false start and the almost-13-year-old script, it's probably safe to say Byington is taking anything but the easy way out with this project.

Star Schwartzman is no stranger to working with Austin directors, having starred in a handful of fellow University of Texas alum Wes Anderson's features. (Their latest collaboration, The Grand Budapest Hotel, is due in theatres in March.) The production company, too, has a tangential Austin connection: While Faliro House is a Greek company, it had its name on both Byington's previous feature and Richard Linklater's Before Midnight in 2013.

At press time, Academy Award winner Olympia Dukakis (Moonstruck), who worked with Schwartzman on HBO's Bored to Death, was also confirmed as part of the cast. Keep an eye on this space and our website for more casting announcements as they become available: austinchronicle.com/daily/screens.

Update (Jan. 20): Byington wrote Jan. 18 to say Tunde Adebimpe was on board again as of late last week.