1. 12 Years a Slave Brutal yet eloquent, this powerfully rendered film about the most shameful chapter in our nation's history should be required viewing for every American, regardless of race.

2. Gravity An amazing technical achievement on every level, this film set in the silent expanse of outer space is the year's most wondrous moviegoing experience.

3. All Is Lost A companion piece to Gravity, this near-wordless tale of an adrift everyman struggling to stay alive at sea is unadulter-ated cinema.

4. Her A lonely guy finds romance with a disembodied voice in the year's sweetest film. It's the roller coaster of love when your beloved is an operating system on your cell phone. 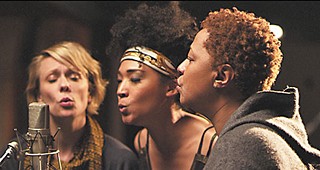 6. Much Ado About Nothing This lively adaptation of the Bard's comedy intoxicates as it navigates the course of love that never runs smooth. Inspires you to brush up on your Shakespeare.

7. American Hustle Unpredictable but never out of control, this reimagined telling of the Abscam sting operation circa the late Seventies is an actor's paradise, particularly Jennifer Lawrence in the year's most original performance.

8. Inside Llewyn Davis Cynical? Yes. Dark? Oh, yes. Funny? In the way only the Coen Brothers can deliver. A hapless folk singer comes to terms with the fact he's his own worst enemy. 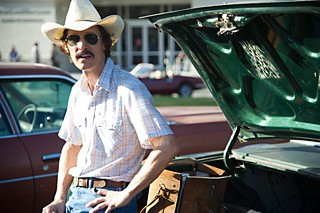 9. Mud Another impressive entry in the McConaughey renaissance and a solid piece of filmmaking from up-and-coming director Jeff Nichols.

10. 20 Feet From Stardom A love letter to the nameless backup singer, this is the year's best (and most entertaining) documentary.

The Conjuring, The Wolf of Wall Street, The Way, Way Back

42: Jackie Robinson, the ballplayer who broke the color barrier in professional sports, gets the Hollywood whitewash in this uninspired biopic about an inspiring man. Paging Spike Lee.

Year's Best Movie-Geek Experience: Double-bill of Room 237, the documentary deconstructing The Shining, followed by Kubrick's film. Turns out some wacky readings of the film ain't so wacky.

film, 12 Years a Slave, Gravity, All Is Lost, Her, Ain't Them Bodies Saints, Much Ado About Nothing, American Hustle, Inside Llewyn Davis, Mud, 20 Feet From Stardom, Blue Jasmine, A Hijacking, Frances Ha, The Spectacular Now, The Wolf of Wall Street, The Way, Way Back, Side Effects, Pacific Rim