1. Her The singularity inspires a singular romance. Whether or not Spike Jonze's sci-fi "what-if?" proves prescient, right here and right now it's an honest-feeling inquiry into the universal desire to be understood perfectly and loved anyway – or because.

2. 12 Years a Slave Yes, it's an "important" movie – an essential one – but it's also a rigorous, rattling work of artistic expression; I was dizzy afterward from holding my breath.

3. Before Midnight Linklater and co. dared to stray from the winning formula – that giddy stomach flip at new (or revived) love – to chew on the gristle of a committed relationship. Devastating, invigorating, and a crucial next step.

4. Inside Llewyn Davis If you find the Coen Brothers' take on melancholy and artistic frustration as weirdly warming as I do, then this winter distemper was like two hours cozied by a fire.

5. Short Term 12 I spontaneously burst into tears at the last shot of Destin Cretton's compact micro-indie about at-risk teens and their barely adult caretakers. So many feelings.

6. American Hustle In his quick-clip second act, David O. Russell might as well be belting "Let Me Entertain You." Sensuous, hilarious, expertly acted.

7. Frances Ha A beautifully composed picture of one woman wildly flailing. Greta Gerwig went splat like a champ, and who knew Noah Baumbach could be so cheering?

8. The Past Asghar Farhadi's fraught family melodrama afforded everyone a chance to give testimony in the cross-examination of past trauma; fix your eye in the right place, and even the coma patient had something to say.

9. Warm Bodies There were two Romeo and Juliet adaptations this year; this sweet, spry romantic comedy about zombies was the only one with a heartbeat.

10. Prince Avalanche Waggish comedy, or baffling/beguiling picture of the afterlife? I couldn't convince anyone of my pet theory that Alvin and Lance were actually dead, but whatever their purgatory – literal or figurative – it got under the skin.

In the House, Harry Dean Stanton: Partly Fiction, All Is Lost, It's a Disaster, Enough Said

Blue is the Warmest Color

About Time, The Croods, Beautiful Creatures

The makers of Movie 43 must have a slam book of Hollywood secrets under lock somewhere: How else did they enlist so many A-listers to this crap?

Why Does the Governor Want to Keep Refugees Out of Texas?
The Austin Chronicle Show examines resettlement, and punk 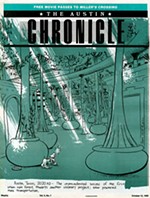