Introducing the banner crop of 2013 films

Funny thing about Top 10 lists: We all seem to have a love/hate relationship with them – journalists, especially. It's something of an annual obligation or expectation for us, a way to encapsulate the year and move on to the next. While I enjoy reading lists prepared by others on topics I'm interested in, I dread composing them myself. It puts a note of finality on something that's really only a snapshot in time. Film titles jockey for position and often shift places during the preparation. My final list is what's left standing when the final deadline buzzer goes off.

Also, there's the age-old problem of comparing apples to oranges. With films, there's always the issue of comparing dramas to comedies, fictional narratives to documentaries, animation, and foreign films. The playing field isn't level, and there's also the problem of release dates. The studios put out their most likely awards candidates during an end-of-year deluge, in a hope that the movies that are freshest in critics' memories will be foremost in nominations. It can be even dicier for critics in the "flyover states": For example, the Chronicle film critics' No. 1 film pick, Spike Jonze's Her, will not open in Austin until Jan. 10 (along with two other awards contenders – Lone Survivor and August: Osage County).

Last year in my introduction to the lists prepared by the Chronicle's film reviewers, I bemoaned the fact that I struggled to come up with a list of 10 worthy titles. Perhaps it says something about the difference between 2012 and 2013 that I had the opposite problem this year. Too many films, too little space. Does that mean that 2013 produced a better crop of films than 2012? I think that's the case, but it may really only reveal something about my own state of mind rather than the overall state of film. Early year-end tallies, however, indicate that it was a bountiful year at the box office – and not just for the blockbusters.

So, because I found no other place to list more of the movies that brightened my year, I present some of them here: Blue Jasmine, American Hustle, Mud, Tim's Vermeer, In a World ..., AKA Doc Pomus, Fruitvale Station, Enough Said, Short Term 12, Ain't Them Bodies Saints, and Side Effects.

2013 was an extremely good year for Austin filmmakers; it was a year in which our city became an undeniable film capital. Films such as Richard Linklater's Before Midnight, Robert Rodriguez's Machete Kills, Jeff Nichols' Mud, David Gordon Green's Prince Avalanche, and Terrence Malick's To the Wonder all had major national releases. Hell, Rodriguez even owns a TV station now and is producing content for the channel. Other films also experienced smaller national rollouts and widespread festival attention, while reinforcing the sense of Austin's percolating film scene. Examples include Andy Garrison's Trash Dance, Bob Byington's Somebody Up There Likes Me, Andrew Bujalski's Computer Chess, Nathan and David Zellner's Kid-Thing, Clay Liford's Wuss, Tim McCanlies' Angels Sing, Katie Graham and Andrew Matthews' Zero Charisma, and no doubt others that have escaped my mind at present. Austin-based film producers, screenwriters, and actors have also had a high-flying year.

Already, 2014 is knocking at the door as we huff and we puff to put 2013 to bed. Austin-made films will be representing at the upcoming Sundance and South by Southwest film festivals. Expectations for another very good year dance like sugar plums around our heads – at least until the January slog of movies is released and we realize that the holiday season, which gifts us with so many of the year's best movies, has passed and it's back to business as usual (in other words, mediocrity) at the cineplex. Happy viewing until then. 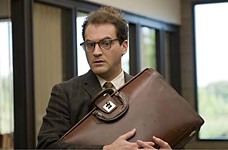