Put the T and V in Thanksgiving It's the day before Thanksgiving, and there on your chair, you're already zoned out, but do not despair. There's plenty to watch on the little ol' tube – holiday specials for the pros and the noobs. With pies in the oven and turkey out back, you'll have plenty of time to sit down and relax. So grab your remote and go back for seconds; this holiday TV compendium beckons.

• 9am, AMC: Gone With the Wednesday: In case you missed it any of the last who-knows-how-many years at the Paramount Summer Classic Film Series and want to study up before the film's 75th anniversary next year, Gone With the Wind airs back-to-back ... to back- to-back (that's right, four times) on AMC.

• 3pm, ABC Family: Charlie Brown movie marathon: ABC Family screens a marathon of some favorite Peanuts movies – Race for Your Life, Charlie Brown; Snoopy, Come Home; Bon Voyage, Charlie Brown (and Don't Come Back!!); and A Boy Named Charlie Brown – but you'll note that the obvious seasonal choice is missing. More on that in a moment.

• 7pm, the CW: Planes, Trains and Automobiles: Hopefully by now you're settled in with family and friends for the weekend and won't be able to too closely relate to Steve Martin and John Candy's desperate attempts to get home for Thanksgiving dinner.

• 9am, NBC: Macy's Thanksgiving Day Parade: Accept no imitations. We trust the 87th annual march will be bigger and better than ever, with 8,000 participants, a Wizard of Oz tribute, and a dreidel balloon for Chanukah, as the holidays overlap for the first time in parade history.

• Noon, NBC: The National Dog Show: That's right: You don't even have to change the channel to get another few hours of choreographed movements, outrageous outfits, and excitable participants – this time with four legs.

• 3:30pm, CBS: NFL Football: Oakland Raiders at Dallas Cowboys: I won't pretend to know anything about football here, but I hear it's sort of a Turkey Day tradition for a lot of folks, and why not flip on a game with a team from the home state?

• 7pm, ABC: A Charlie Brown Thanksgiving: Now you know why the sister network left out the obvious choice: They wanted to save the best for last. This 1973 Peanuts special deserves a night all its own to celebrate its 40th anniversary. Plus, Snoopy and Woodstock's special of toast and popcorn probably sound pretty good right about now.

• 8:30pm, ABC: Lady Gaga & the Muppets' Holiday Spectacular: They both have wacky hairdos, wear funny furs, and like to get a little animated. Honestly, we're surprised this pairing didn't happen before now. Holiday favorites and Gaga singles help promote the Lady's new album, ARTPOP, and Muppets Most Wanted, due in theatres next spring.

• 8am, AMC: Hitchcock marathon: After braving Black Friday crowds at the crack of dawn, nothing from the Master of Suspense will scare you. Today's lineup? Vertigo, Rear Window, Psycho, and The Birds (celebrating its semicentennial).

• 6am, E!: Mrs. Doubtfire: Because nothing says family like a desperate and cross-dressing Robin Williams, a smarmy Pierce Brosnan, and a tiny "Jump Around" dance party.

• 10am, Animal Planet: Meet the Sloths: You're coming down off a three-day tryptophan bender. I'd bet you can identify with these little creatures better than you'd care to admit.

• 11am, Spike: Star Wars marathon: The network for dudes and bros is airing the much-reviled prequels first, but there's a palate-cleansing Episode IV scheduled for 9pm. Still looking for something to be thankful for? It's J.J. Abrams.

• 3pm, NBC: Unforgettable Holiday Moments on Ice: Only a few months left before the Winter Olympics in Sochi quench all your figure-skating thirst, but why not enjoy a little aperitif now? 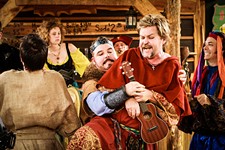 TV Eye
Highs and Lows and Things in Between