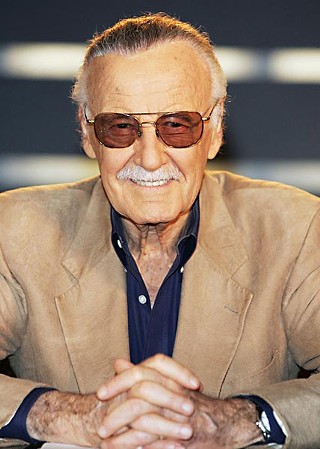 If comics have a face, it's not a masked web-slinger or a jade-skinned giant or a hammer-wielding Norse god. It's a 91-year-old native New Yorker with the heart of a child, an imagination that soared across the galaxy, and an impish sense of humor. "I'm Stan Lee," the founder of Marvel Comics tells me from his West Coast home. "I think. It's early in the morning."

Stan Lee defined comics. As publisher, writer, and editor at Marvel Comics, this week's guest of honor at Wizard World Austin Comic Con shaped what the superhero genre has become. He said, "What I tried to do was pay as much attention to the character's personal life as his superhero life. A superhero who can do anything, to me, isn't that interesting." The reader could look at the character and instantly associate. Spider-Man fretted about his aging aunt's health. Daredevil was a working lawyer. Even the Fantastic Four were just tenants at the Baxter Building, dealing with an angry landlord every time Skrulls took the service elevator. The equation for grounding a character is simple: "First of all, you have to make the reader care about him. Then you have to make the reader worry about him." A chuckle. "I don't want to say anything more, because I don't want all our competitors to know how to write these stories."

After 61 years of publication, that Marvel equation still wins audiences, and not just at the comic store. Marvel Comics has now become Marvel Studios, and the characters Lee co-created – the Fantastic Four, the Hulk, Iron Man, Thor, the X-Men, Daredevil, and Spider-Man – have grossed over $9 billion globally at the box office. Add in titles he oversaw in The Avengers, Captain America, and more, and Lee's brainchildren have grossed upwards of $12 billion for Hollywood. Not bad for an Errol Flynn-obsessed kid from the Bronx.

Make no mistake, Marvel is New York, and New York is Marvel. Even with all this Hollywood success, the comic division's head offices are still just a block away from Radio City Music Hall – walking distance for most of Marvel's mightiest heroes. That was always part of Lee's plans. He said, "Even though they were superhero stories, I wanted to make them seem as realistic as possible, so I wanted to set them in a real city. I didn't want a Gotham or a Metropolis. I lived in New York, I knew New York, and it's the greatest city in the world to set a story in."

The lights of the Big Apple still illuminate the company they call the House of Ideas. Last week, Disney and Netflix announced their latest project: four interlocking miniseries centering on a quartet of street-level heroes – Daredevil, Jessica Jones, Iron Fist, and Luke Cage. Together, they will form the streetwise, knuckle-cracking answer to the lofty Avengers – the Defenders. All four reside around the slowly gentrifying neighborhood of Hell's Kitchen – another part of Lee's legacy. "If I wanted to have a guest star in a story, it was easy for them to meet. They were all in the same city."

These live-action TV and movie excursions have not replaced comics. In fact, they are helping resurrect them. Between Marvel and DC's current cinematic crop, plus fans of AMC's The Walking Dead heading to the bookstore, sales are already up 10% over 2012. It wasn't always so. Marvel spent years laboring away on cut-rate movies and low-budget TV shows like The Incredible Hulk. They had kitsch charm, but they lacked the cosmic thrill of Galactus towering over Times Square, or Doctor Doom testing his strength against the Thing. Now, when Thor casts his mighty hammer Mjølnir into the ranks of dark elves, it leaps straight off the page. "They couldn't have been done years ago, because we didn't have the special effects capability," Lee said. "Now there's nothing you can dream of that they can't put on the screen."

Even when the movie bubble finally bursts – and many see it as when, not if – the comic presses will still keep rolling, and digital readers will still keep downloading. Whether in 4K projection or four-color pulps, there's a simple joy to seeing Captain America take down the Red Skull, or when the Hulk whips Loki around like a dog with a sock. For Lee, it all comes down to good vs. evil. "Comics are like fairy tales for grownups," he explained. "When you were a kid, you loved reading about witches and dragons and monsters. Now you're grown up, you're too old to read fairy tales, but suddenly there are these superheroes, and they're the same kind of stories, with villains that are bigger and scarier than life, and heroes who are bigger than life."

Lee himself seems a little larger than life. While most of his peers are either dead or retired, he's still chairman emeritus at Marvel, as well as running POW! Enter­tain­ment, whose new animated show Stan Lee's Mighty 7 will debut on the Hub Network in 2014. He even released his own signature cologne. "I can't think of anything better to do. If I could, I'd drop this in a minute." Not that he's stuck behind a desk. Two weeks before this weekend's Austin adventure, he held his own convention, Comikaze, in Los Angeles – another opportunity to meet the generations of readers who grew up on his creations. "I don't consider them fans," Lee said. "They're all friends. We have a good time together, we kid around, and if I wasn't doing this, I'd probably end up bored sick, playing golf."