Forever Fest co-founders Sarah Pitre and Brandy Fons hate the term "guilty pleasure." "If you love something, you shouldn't feel guilty about that," says Pitre. "You should just enjoy it."

That, in a nutshell, is the idea behind Forever Fest, a "celebration of girly pop culture" that will paint the Alamo Drafthouse Ritz pink for three days this weekend with screenings of nostalgic favorites Sixteen Candles and Empire Records, a "danceoke" dance-along, a brunch montage of leading men, and a sneak preview of The Book Thief, adapted from a popular young adult novel. Featuring a clip show sponsored by BuzzFeed, a YA writers panel with screenwriter Kirsten Smith (Legally Blonde, 10 Things I Hate About You) and snarky "Fug Girls" Heather Cocks and Jessica Morgan, and – of course! – an Eighties prom, the inaugural Forever Fest seeks to cover all the bases of what is scientifically known as "girliness."

Speaking to Fons and Pitre, it's tempting to see them as characters in the films they adore. Fons, co-owner of the public relations firm Fons PR, is quirky in pink cat-eye glasses and polka dots, while ice-blond Alamo Drafthouse programmer Pitre jangles an armful of chic white bangles. Their combined experience – Fons manages Fantastic Fest and several other film festivals around town, while Pitre programs Girlie Night at the Drafthouse and is the creator of the website ForeverYoungAdult.com – gives them a formidable air of expertise. They also squee a lot.

Forever Fest is being billed as a kind of sister festival to the highly successful genre festival, Fantastic Fest; in fact, the passion of horror and sci-fi fans for their genres partly inspired the idea. At last year's Fantastic Fest, Fons realized that films like Girls Just Wanna Have Fun, which she watched obsessively at high school sleepovers, and Pretty in Pink, which inspired her to dress like Molly Ringwald as a teenager, inspired rabid devotion in their fans, but weren't being celebrated in the same way.

And don't get them started on chick flicks like The Notebook.

"I think they've been underappreciated, to be honest, and sort of marginalized," says Pitre. "People use the words 'chick flick' or 'rom-com' in a derogatory way. Just like with any genre, there's good rom-coms and bad. I'm not here to say that every chick flick is an incredible piece of filmmaking. But I do think that a lot of people in the industry and in our culture really look down on the chick flick genre. This festival is about reclaiming that term and saying: 'We love these movies. We're not ashamed that we love these movies; these movies speak to us.' And that's what we're going to celebrate."

They're not alone. Girlie Night draws impressive audiences, and the Drafthouse regularly sells out screenings of lady-friendly films like Love Actually, Sex in the City, and Magic Mike. Drafthouse CEO Tim League signed on and came up with a name both women loved.

Pitre points out that "forever" is something of a staple in the teen vocabulary. "'Best friends forever,' 'I'm going to be in love with this boy forever': Part of Forever Fest is this sense of nostalgia. We are revisiting these movies that we found when we were teenagers that we couldn't stop watching and we still watch today. We have this passion for these films that is forever." Pitre herself watched Sixteen Candles and Empire Records obsessively in high school. "We would quote Lucas [from Empire Records] constantly, which was probably obnoxious to my parents."

Wait a minute. Empire Records counts as "girly"? "We consider a girly movie to be something that has a girly fan base," explains Pitre. "It doesn't mean guys don't like it."

"And that fan base celebrates that film in different ways," Fons says. "Like, I doubt the male fan base thinks Rex Manning is as sexy as we do and names a party after him. We're definitely celebrating it in a girly way."

And what does that mean?

The list goes on: YouTube videos of kittens making friends with large dogs. Movies that erupt into glittery dance sequences. Endless discussion of Ryan Gosling's biceps and Channing Tatum's abs. And – to circumvent Drafthouse rules of no talking or texting during the film – passing notes.

There are limits to this particular take on women's interests, but Pitre and Fons are quick to say the festival doesn't represent all women. "That's why we didn't call it a celebration of women in film," Pitre says. "This is a very specific niche. And to people who say it's anti-feminist – first of all, if you look at me and Brandy in our professional roles, I think we're strong women. No one's going to look at a CEO of a company and be like, 'Oh my God, I can't believe he likes some dumb bro movie.'"

Fons agrees. "Fantastic Fest is definitely not for everybody, in the way that it geeks out and celebrates those films. Forever Fest won't be for everybody either, and that's fine."

Pitre and Fons, who used a 12-year-old's bedroom to film their Kickstarter campaign video, aren't apologizing for their stuffed-animals-and-nail-polish version of girliness. A single moment's reflection on the action figures and comic books that fill the apartment of the stereotypical Fantastic Fest attendee suggests that regression and "geeking out" go hand in hand – and neither is limited to one gender.

And anyway, some teen experiences may be better when relived as an adult. Pitre remembers her own prom night with a sigh. "I wasn't asked. I asked this guy I had a crush on who didn't go to my school. I remember thinking, 'Something romantic's going to happen; it's going to be just like in the movies.'" Sadly, it wasn't. "It sounds depressing, but it gave me a dose of reality that I think my teenage self really needed." That elusive magic moment came years later, when Pitre was slow dancing with her now-husband for the first time – at an Alamo prom.

The lesson for fans of girly escapism? "Life isn't going to be just like the movies. So when it does feel like that, you should appreciate it." This weekend, festival attendees will get the chance to do just that. 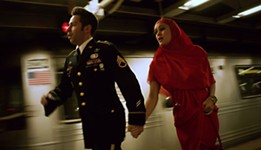