Reviews You Can Use

Find the gray area in 'The New Black,' or explore sweeping panoramas and unbridgeable divides in 'The Most Fun I've Ever Had With My Pants On'

The Most Fun I've Ever Had With My Pants On


At its heart, former Austinite Drew Denny's The Most Fun I've Ever Had With My Pants On is about expanse – the seemingly unbridgeable divides between friends or between a father and daughter. Dropping her characters in the sweeping panoramas of the American Southwest, Denny lets those distances tell the story, subbing dialogue for an anxious hush. One could call it mumblecore, except there's hardly ever a mumble.

The film follows brash Andy (Denny) as she travels from L.A. to Austin to scatter her father's ashes, and her childhood best friend Liv (Freaks and Geeks' Sarah Hagan) is along for the ride. The pair are polar opposites: Lesbian Andy masks grief and bitterness with constant diversion; straight Liv, an aspiring actress, can't seem to escape her own headspace.

With plenty of kicked-up dust, the film plays like a shier Thelma & Louise. But where that Callie Khouri vehicle frames its road trip as a series of reactions to men, The Most Fun largely eschews the complications of romance. Andy does flirt with seducing Liv in a tense scene, but it speaks more to Andy's persistent desire for sensation than to a yearning for love.

The film rebels against the Hollywood notion that a few days must have lifelong spiritual impact. The Most Fun doesn't offer any overriding arcs or wistful internal dialogues; even when Andy is forced to confront her mourning, it does not feel exactly like catharsis. Denny's characters almost aggressively resist change.

The stasis is beautifully shot by Will Basanta. With so little dialogue, his camerawork becomes a third character, capturing wide shots of the desert and whispered tête-à-têtes with equal aplomb. Basanta's spare approach belies Andy's boldness, stealing glances that show she is just as unsure of her hijinks as Liv is.

As with everything else on The Most Fun's lonely journey, the expanse becomes wider the closer one gets. 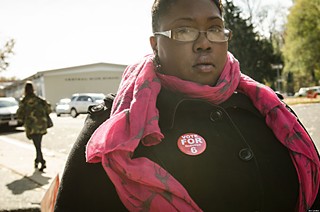 In the age of agitprop like 8: The Mormon Proposition, it's rare for a queer documentary to take on nuance. Rarer still is a film that gets past the boo-hiss of perceived villainy to search for the truth outside of media narratives. Framed around the battle for marriage equality in Maryland, The New Black might not provide any easy answers, but it argues that easy answers sometimes do little but wallow in muck.

The title to director Yoruba Richen's tangled documentary is a bit tongue-in-cheek, rejecting the false equivalency that the LGBT and African-American civil rights movements are two sides of the same coin. Instead, Richen invites the viewer to examine the more subtle ways the two communities intersect, and how Christianity affects them both.

To do so, Richen lets the subjects weave the narrative, never nudging the interviewees to a predetermined end. Homophobic African-American churchgoers are certainly allowed to express ugliness, but not at the expense of degrading the entire church. Interview subjects make clear the vital role the church continues to have in African-American communities.

It's a sharp contrast to the demonization thrown by many LGBT leaders in the wake of the African-American vote on California's Proposition 8 same-sex marriage ban. Some mainstream LGBT organizations and media outlets made a bogeyman out of the black community, insisting that homophobia is greater among blacks than whites. The New Black refuses that line of thinking, pointing out that anti-LGBT votes are largely manipulated by predominantly white anti-gay organizations.

The New Black also refuses to frame its subjects in the context of either/or. In the most devastating scenes, young black LGBT activists go door-to-door trying to garner support for marriage equality. Their marginalization is compounded by slammed-door hostility, but still they soldier on. When marriage equality finally passes at the end of the film, one can't help but cry with them.

Polari, Polari26, The Most Fun I've Ever Had With My Pants On, Drew Denny, Sarah Hagan, Will Basanta, The New Black, Proposition 8, LGBT, gay rights, civil rights, Yoruba Richen