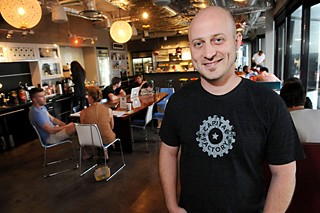 You can get a pretty good view of the big business buildings' rooftops in Downtown Austin from the 16th floor of the Omni Hotel. If you're lucky and walk into the kitchen at the right time, there's usually free barbecue, too.

It's on that floor you'll find Capital Factory, Austin's Easy-Bake Oven for tech start-ups – small companies founded on little more than an idea and sound wi-fi. More than 150 such companies office within the 25,000-square-foot co-working space, and some 400 workers plug in. "Entrepreneurs" is what the space's Managing Director Joshua Baer calls them. He's started six different companies himself.

By nearly every account, Capital Factory is the crème de la crème of locally operating tech-related accelerators and incubators – hot new networking meccas cropping up within the tech landscape over the past decade in places like Silicon Valley; New York City; Washington, D.C.; and most certainly Austin. They're mentorship programs, meet-up facilities, and co-working spaces designed to help small start-ups reach profitability – not raise money, the goal is to make money – quickly and without an abundance of overhead. Baer, who started the Capital Factory in 2009, is one of the best in the business at making that happen – mostly because, in the professional world at least, there is nothing that Baer enjoys doing more.

"It's all about how many interesting, smart, like-minded people I can get into this space," he says. "That's all I'm doing: identifying cool, interesting people and trying to suck them in so that they spend time here and become a part of this. The more that we get, the better it gets for everybody."

Now 37, Josh Baer has been working to help make other people money since before he could even attend his five-year reunion for college. When he was 24 and working within the incubator program at early Austin tech mecca Trilogy, a company that, along with Dell and IBM, downright dominated this city's software scene, he started and subsequently sold online holiday wish list registry IveBeenGood.com for $20 million – money that went straight to Trilogy.

He'd already started his own company independent of Trilogy by then: an email service provider called Skylist that operated email lists for companies like Microsoft, Sony, and NASCAR. He launched that one while he was a freshman at Carnegie Mellon University in Pittsburgh. In 2000, when he sold IveBeenGood.com and returned to operating Skylist full time, it was bringing in an annual net profit somewhere in the six figures.

Baer returned to Skylist having learned a valuable lesson: that young upstarts should be taught by experienced entrepreneurs to actually make money, not obtain skills to help an employer. Eight years later, after the dot-com bubble burst and the housing market crashed – and he'd started two more email-centric companies and served on more advisory boards than, honestly, someone should have time for in one standard lunar cycle – he figured out a way to institutionalize the teaching. In January 2009, just a few months after that housing crash, he rounded up a handful of directors and opened the Capital Factory as the "entrepreneurial center of gravity in Austin, Texas," a localized center for mentoring, investing, and, as Baer likes to say, "helping people quit their jobs."

"Y Combinator had just recently launched, and TechStars, and I was familiar with those," he says of two similar spaces, both of which were born in Silicon Valley. "They reminded me a lot of what we'd gone through with Trilogy University and its boot camp and incubator. It was a convergence of two things: this feeling of helplessness concerning the economy, and this fascination with what places like Y Combinator and TechStars were doing. ... I was already investing in a lot of start-ups and mentoring them and helping them; this was a formalization of that."

Baer moved Capital Factory's first iteration into the Omni's eighth floor, where he had a conference room to host meet-ups and a few extra offices for companies still trying to get their footing in town. In came WP Engine and current Capital Factory co-director Jason Cohen, who moved into the space and started working next to Baer's team at OtherInbox. More came after that, like AppSumo, which sat down for a few months, "got too big," and moved into their own space, and Whoosh Traffic, now called MarketVibe, which came to Austin from Silicon Valley and now operates out of an office on East Cesar Chavez.

In May 2012, after seeing that this co-working idea had legs, Baer leased the 16th floor of the Omni from Smiley Media and set up a series of varied officelike spaces, one of which Smiley moved into.

Today, Capital Factory counts more than 45 mentors, 400 co-workers, and 150 companies doing everything from making ticket sales easier (Ticketbud) to making your pets' daily meals more nutritious (Bones and Co.). Capital Factory also hosts 30-odd meet-ups and events each month – Baer says he usually attends one or two each week – in addition to a handful of on-site and on-location happy hours and get-togethers. In addition to all that, Baer and his partners recently opened a second, just-as-large space on the Omni's fifth floor, one that offers small businesses private offices with things like doors and four walls.

"It's all just kind of a break-even business," he explains of the Omni's co-working space. Capital Factory's Incubator program, which currently holds 35 companies, takes 2% of each company, and those who wish to join Capital Factory's Accelerator program throw another 1% toward each mentor. "Nobody makes any money off [the co-working]. It's designed to create this environment where myself and about 30 other people like me, who have built and sold companies already, can mentor the companies, invest in them, find the ones that work and help them grow – because it's really fun, and we can make a lot of money helping them get started and grow."

The individual who put me in touch with Josh Baer told me that he was an accessible guy who was "super busy" and also "tough to schedule," but when the introductory email got sent out to the two of us, at 8:13 on a Thursday morning, Baer was the one who responded within three minutes.

He invited me to the Capital Factory that Friday for a 5pm tour and a happy hour to follow, one with food and free booze that went down in the office's kitchen and entertained about 30 co-workers. Baer, who scheduled my tour to run with a representative for a member of Congress (as the numerous Apple TV slideshows broadcasting photos from Capital Factory events are quick to display, President Obama stopped by for a series of tech-related demonstrations in May), whisked around the floor the entire time, moving with purpose – at one point rearranging the positioning of a plant he'd set into place literally 10 minutes prior – and directing those wanting to speak with him toward the kitchen's weekly hangout, where he'd be available in "just a few minutes."

Over 19 minutes, he ran into five such suitors. The next Thursday, when I returned to work in the space for the morning and interview Baer after lunch, I watched him do everything from meeting with executives at Bazaarvoice to conferencing off-the-cuff with his employees to getting stopped three different times in the space of 15 feet to confirm different meetings.

He's impossibly busy, even in the space of his own office. That's what makes the future of Capital Factory so interesting.

Baer readily admits that Capital Factory has reached a mass of companies that prohibits him from actually getting to know each start-up personally. Whereas he and his partners used to vet each applicant individually, the process now requires that potential start-ups find somebody already within Capital Factory to vouch for them and their business.

"I can't personally work with hundreds of start-ups," he relays in an email. "That's why we've set up a scalable system that grows the number of mentors with the number of start-ups." He added that Capital Factory works to bring in three to five new mentors each month.

That such a system is necessary doesn't do much to impede Baer's vision, but its ramifications could spell trouble for companies who may join Capital Factory in hopes of getting Baer's attention only to find that he's already spread too thin.

"Think of it like layers of an onion," he says. "We're most focused on the core and the companies that we've invested in and have a stake in and are actually working with. At the same time, I have a pretty good pulse on the companies that are here and what they do."

And while the other companies don't exactly get left out to dry, Baer's maintained a measured approach with the ones he and his fellow mentors aren't actively working to build toward profitability.

"Just looking at the numbers, half of these companies won't work," he says. "What happens if a company doesn't work? If they were off somewhere in some sublet by themselves, nothing probably happens. They go get jobs and move on. But the best possible thing to happen in that situation is that they go to work at another start-up, which they're much more likely to do here."