Alamo Drafthouse honcho Tim League on debates, distro, and the change in venue

If you're a Fantastic Fest veteran, and you're heading to its regular home at the Alamo South Lamar, stop. You're going the wrong way. For one year only, Austin's biggest celebration of international genre films, mind-bending movies, and cinematic curveballs has relocated to the chain's newest location, the Alamo Lakeline. But, as the book says, don't panic: Festival founder and Alamo supremo Tim League said, "My goal is to have everyone say, 'That was awesome, that felt exactly like Fantastic Fest.'"

Fantastic Fest has never just been about the films. It's a destination festival – one which filmmakers attend even if they don't have a movie to show, regulars schedule their vacations around, and at least one couple this year is using it as their honeymoon. Since its founding in 2005, the festival has always been synonymous with and structured around the South Lamar location, from the drinking parties at the nearby HighBall, to repainting the building facade for 2012's Frankenweenie premiere. When the South Lamar Plaza owners announced last year that the surrounding strip mall was becoming a mixed-use development with the Drafthouse as its anchor tenant, League hoped against hope construction would be done by festival time. Unfortunately, it still looks like a bomb site, so for 2013 the circus parades north. "The people who are saddest about the change from South Lamar are people who live in South Austin," said League. "There's a huge group of people in North Austin who are superexcited about this change, even though it's likely to only be for this one year." For out-of-towners, he added "the bonus is that actually there's hotels very nearby" – unlike at South Lamar. Of course, there's still the loss of the HighBall, which mutated into a meeting space/party zone/shared office. However, League said that, between the patio of Lakeline's Glass Half Full beer bar and a fenced-off, covered area, "there'll be just as much mingling space as there was before."

Some of the trademark events will have to be relocated off-campus: The notorious Fantastic Debates – in which film fans and stars exchange barbs and then literal punches over a controversial point of cinematic lore – will be held at a nearby boxing gym. League is a veteran of the fights, having had his ass handed to him over the years by Uwe Boll (aka the world's worst film director) and Machete Kills star Michelle Rodriguez. Typically flying in the face of sanity and self-preservation, this year League will match wits with Keanu Reeves, director of Man of Tai Chi (see "Keanu Reeves Is in Fighting Trim," at right), and then get in the ring with the film's star, Tiger Chen. League said, "Maybe this will be my last fight. Maybe I'll be in traction."

Not that he'll have time to rest on his laurels or even let the swelling go down, with his other-other day job as founder of Drafthouse Films. This year his distribution house has half a dozen films on the schedule: Psychotropic history lesson A Field in England, the latest from FF regular Ben Wheatley (Down Terrace, Sightseers); SXSW award-winner Cheap Thrills; The Congress, a semi-animated meditation on fame starring Texas Film Hall of Famer Robin Wright; violent Dutch drama Borgman; German religious morality play Nothing Bad Can Happen; and Japanese supergonzo experience Why Don't You Play in Hell? League said, "We are definitely using Fantastic Fest to launch and add publicity to Drafthouse Films titles." However, he's not ruling out expanding their slate before the fest is over. He said, "There's a number of titles on the list that we're interested in, and we're waiting to see how Fantastic Fest audiences react to them."

And if he's got five minutes to spare, he'll also be at the first ever Mercado Fantastico aka Fantastic Market, a collaboration with Robert Rodriguez's new El Rey network and Mexican production/distribution firm Canana. Directors and producers – many of them Fantastic Fest veterans – from across the Spanish- and Portuguese-speaking world will have a platform to pitch their next production to potential investors and distributors. "Filmmakers always have a project that's written but is just missing that all-important component of funding," League explained. He calls bringing together the cash and the creativity just a continuation of the festival's remit: "To do everything we can for filmmakers."

Enjoy our Fantastic Fest pre-coverage? There's plenty more where that came from on our designated Fantastic Fest website, austinchronicle.com/fantastic-fest, where you'll find extended interviews with Schwarz and Moore, our preview of the (free and open to the public) Fantastic Arcade, and up-to-the-minute previews, reviews, interviews, and photo galleries from the festival site. 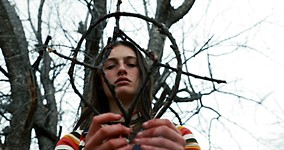