Raise a Glass to 'Drinking Buddies'

Something big is brewing with Joe Swanberg these days

For longtime fans of Swanberg's work, Drinking Buddies is a surprising jump in scale and tone – like if Woody Allen had gone straight from Bananas to Annie Hall. It's set among the mash tuns of Chicago's craft brewing scene; "It's not the Hollywood glamour shots version of working in a brewery," Swanberg said. "It's not sweeping vistas of stainless steel tanks. ... I think we did a good job re-creating how much working in a brewery is a job, and how unfun and unglamorous most of the work is." But it also ferments the familiar Swanberg themes of strained relationships. This time, it's between two couples: brewer Luke (Jake Johnson, of New Girl) and his ever-patient girlfriend Jill (Pitch Perfect's Anna Kendrick), and brewery promotions manager Kate (House M.D.'s Olivia Wilde) and her long-suffering boyfriend Chris (Ron Livingston of Office Space). The real tension, though, is in the third couple: Luke and Kate stand on that blurry line between best friends and a lot more, and it's Chris and Jill left standing on the sidelines. After all, they only get their significant others on nights and weekends. Luke and Kate spend all day, every day, together side by side in the brewery, or at tastings, or unwinding over an ale after a day at work.

Unlike his earlier films, loaded with characters that Swanberg described as "just out of college and struggling with who they want to be," Drinking Buddies is a more mature movie. It's about the road not taken, the kiss not stolen, and the one-night-stand that never happened. He said, "It's something I always hoped would happen, that the movies would incrementally move along with me. It's one of the nice things about starting to take on characters who are in their 30s. There is this level of comfort. They know each other better, sometimes, and I think that, over the next couple of years, the films will much more start to deal with marriage and children and various kinds of responsibilities." 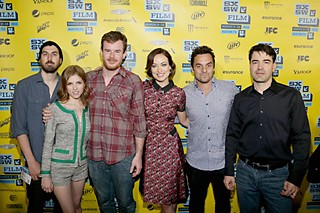 Swanberg has always told stories about what he knows, and in this case he knows beer. In fact, the whole movie is a love letter to brewing culture. It's a romance that began five years ago, when his wife gave him a homebrew starter kit. He said, "I needed a hobby that didn't have the critical infrastructure around it that filmmaking has. I needed to start and finish a project that I could just give to friends and have a personal experience with." Quickly, beer became "something I could do by myself in my apartment, something that felt artistic but there was a scientific process involved."

That fascination spilled over and became the basis of Drinking Buddies. Swanberg has always been proud of and defensive about his work (he famously pummeled local critic Devin Faraci in a boxing match at Fantastic Fest last year for saying Swanberg and his friends should stop making films), but he was even more nervous about getting the world of yeast and hops wrong. "I was terrified of screwing it up," he said. "I didn't want to be the guy who made the terrible craft beer movie and then suddenly I couldn't go drinking at my favorite bars in Chicago anymore." Luckily his old high school friend Andrew Mason is now production manager at Three Floyds Brewing, just outside of Chicago in Munster, Ind., and he became "the beer consultant on the movie." Swanberg also had assistance from the staff at Chicago's Revolution Brewing, where the film was shot, while Kate Thomas of Half Acre Beer Company, the inspiration for Wilde's character, walked the actress through the reality of being a woman in this particular male-dominated industry. Swanberg even held what he dubbed "a beer boot camp" for the cast. He said, "The first thing I did with Olivia and Jake when they got to town was bring them over to my house and brew a beer with them."

He may be a small-scale brewer, but as a filmmaker Swanberg is almost legendarily prolific. Starting with his 2005 directorial debut Kissing on the Mouth, he has directed 16 features and collaborated on two anthologies (the gruesome V/H/S and sexual confessional Autoerotic). That's aside from his willingness to step in front of the camera, both in his own films and those of his friends. Yet he is still best known as a fervently independent director, and his films have generally been deliberately lo-fi, heavily improvised, and often shot with a casual, handheld vibe.

Often dubbed the king of mumblecore (a term he and everyone else in the scene despises), so far Swanberg has been famous for super-low-budget, heavily improvised relationship stories, but 2013 changes all that for him – on both sides of the lens. In August, his longtime collaborator AJ Bowen was in Austin for a special screening of action-heavy thriller You're Next, in which the pair play bickering siblings in the middle of a home invasion; it's the first film featuring either to break into multiplexes. On top of that, their newest feature, Ti West's The Sacrament, debuts this weekend at the Toronto International Film Festival. Crazy times for Bowen, who was suddenly being interviewed by every major media outlet. That's nothing, Bowen said: Just think of Joe. Aside from their two horror-tinged collaborations and the digital success of Drinking Buddies, Swanberg had just debuted his latest at Fantasia Fest: 24 Exposures, a murder-mystery inspired by You're Next director Adam Wingard's infamous obsession with fetish photography. Then there's the soon-to-debut Amateurs, dealing with homemade porn, and he's also completing Happy Christmas, a family drama shot on 16mm. "It's a very schizophrenic time," said Swanberg. "I'm bouncing back and forth between actor and director." Drinking Buddies is a much bigger production than most of his older works, with big-name actors working on a much larger stage than Swanberg has been afforded before. He said, "I don't remember there being a moment where I said, 'I want to make something bigger.' I just remember there being a series of moments and a series of conversations where it seemed like this was the right project to step it up a little bit."

In part, the story of workplace near-romance demanded that increase in scale. "I was just at that point when I was ready to exert a little more control, in order to be specific about what a character's apartment looks like, and that these people work in a brewery, which is a location that's going to cost money to rent," Swanberg explained. "Just all these deliberate and specific character traits by default mean a bigger production. That very naturally leads to talking about working with the kind of actors who are already bringing an audience to a movie." There was also one big perk for Swanberg the beer nerd. He said, "On a very selfish level, getting to shoot the movie in a brewery meant I also got to talk to brewers all day and learn more about the process."

But far from just making Swanberg a more knowledgeable beer aficionado, Drinking Buddies also sees him move from cult figure to the cusp of breakthrough status. The film was one of South by Southwest's big premieres this year at the Paramount. The next day, video streaming service Yeah! TV selected Swanberg to help launch their product, and he found himself on stage with Richard Linklater and Wes Craven, talking about cinema culture. The implication was clear: If Craven was a grand master, and Linklater the reigning king of indie cinema, then Swanberg is the heir apparent to the throne.

What remains constant amid all this change for Swanberg is that his regular players are his friends: He's filmed with most of them dozens of times over. They work together because they like one another and like working together and have a certain comfort as performers. With recognizable names but relative strangers like Kendrick and Wilde stepping up to the bar for Drinking Buddies, he said, "We just had to get there a lot quicker. It was an interesting process, because I wanted the same intimate level, but I didn't know these people, and they didn't know each other. But the flipside of that is that they're professionals, and they do this for a living. They come into these productions and own these characters and these relationships. So I found it a fun, easy process of diving in with people who were essentially strangers, and at the end of the three weeks of making the movie, I felt very much like we had gotten to know each other and achieve that level of intimacy."

Something about how Swanberg works is obviously appealing to these Hollywood types: After all, Kendrick stuck around to shoot another film with him, the upcoming Happy Christmas. So is this the end of the Joe Swanberg who would run into a restaurant, steal a shot, and bail with his micro-crew before the server can put the menu down? "Don't worry," he said. "I will do plenty more movies that way, I'm sure."

Drinking Buddies opens next weekend at Alamo Slaughter Lane and Violet Crown, and is available now on iTunes and VOD. 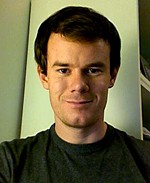