Back to 'School of Rock'

Get schooled on the film by Mike White, Jack Black, and Richard Linklater in time for its 10th anniversary 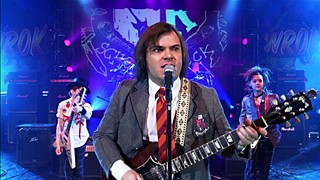 Even big kids can get cold feet.

Jack Black was 34 when The School of Rock was released; it was his first film after a run of off-color comedies that found the Tenacious D frontman playing, among other roles, a stoner (Orange County), a psycho (Saving Silverman), and a chauvinist (Shallow Hal), all with casts comprised entirely of adults. He wasn't Tony Danza, but he was certainly typecast: Jack Black was funny, and he was loud, and he was bawdy, and could get gross. His neighbor, the screenwriter Mike White, wanted to cast him as a teacher.

It was because of Black's flair for rebellious theatrics that White drew up this role. "There's this fantasy that's similar to a guy in a band who wants to go one direction while everybody else wants to go another," White said, equating Black's Dewey Finn, a down-and-out punk-rocker-turned-substitute-schoolteacher who refuses to bore his students with musings on reading, writing, and arithmetic, to his own experiences as a screenwriter, which, to that point, he characterized as a series of compromises and grapplings.

"The idea of somebody who was collaborating with a bunch of very submissive 11-year-olds who had talent but were more pupils rather than collaborators seemed like a fancy of mine, and I felt like I could connect with Jack on that," White said.

"I was actually afraid of it," he said of the prospect of working alongside a cast of kids. "I didn't go into it particularly excited or thinking it would be all fun. I was thinking this was terrifying. I hadn't worked with kids, and if you haven't worked with kids before, you can sort of get freaked out by the process. They're unpredictable. They're like wild animals. Will they like me? I don't know. This could all go horribly wrong."

It turned out to be "the greatest experience" of Jack Black's life.

Art imitates life, and 20 minutes into The School of Rock, Dewey Finn walked into Horace Green Prep School with a belly full of butterflies.

He didn't know how to teach; hardly knew how to communicate with a child. He was down on his luck, short on his rent, and in desperate need of a quick fiscal fix. So he assumed the identity of his reluctant roommate, Ned Schneebly (played by Mike White), and showed up at Horace Green to run homeroom for the fifth grade.

The kids – Freddy Jones, "Zack-Attack" Mooneyham, Summer Hathaway, and their 20 or so classmates – were just as skeptical. They were raised on gold stars and demerits, not the Darkness and T. Rex. They wanted math, science, the classics, the arts. Dewey Finn wanted none of that. He wanted recess and rent money. He cast the kids outside and told them to return to class in a few weeks – when their real homeroom teacher returned to school.

Education is all about the connection between teacher and student, however, and Finn found his just a few days into his stint. Walking through the halls one day, he overheard his students taking part in music class – a typical, preparatory-style class with cellos, violins, pianos, and woodwinds. Finn decided then that music would be the lesson plan going forth, and The School of Rock took its first turn left. It was now, in the words of director Richard Linklater, "a good music movie that was also funny."

Linklater dove headfirst into the music creation component of the film, spending as much time on band rehearsals as he did on coercing the lines out of the actors themselves.

"I wanted the musicians to be authentic," he said. "That started with casting. They said, 'We'll get some kids who look like rock kids, and they'll learn to fake the instruments.' I was like, 'No, no, no. We're going to cast musicians first, and I'll get the performances out of them.'

"I thought a lot about wanting to show the rehearsal process. A lot of kids want to jump to rockstar status and all the attention that they would get. We expanded a lot of the rehearsals and the way the songs were made to make that part look fun. We wanted to make it look fun to be in a band."

It helped to have Jack Black in tow. The last guy you'd ever ask to teach a class of uptight fifth graders about literature was the perfect man to speak to the wonders of Black Sabbath, and there's a change in the movie's trajectory from the first moment that Finn teaches the guitarist Mooneyham to riff "Iron Man." Now he was connecting. Now he was relating. Now he was communicating. Now he was professing his passion to his pupils.

"There's nothing to fear," Black remembered. "Kids are people, too. Some kids are smarter than me and more talented. It's important to talk to them like they're human beings and not romper-room automatons." 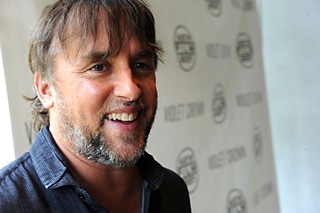 Life imitates art, and in Austin, kids rock out every day.

Whether it's Girls Rock Camp, School of Rock Austin, Natural Ear Music, or Rock Camp USA, young ones around Austin are learning how to rock like Jimmy Page.

"It's about making the kid more well-rounded," explained Frederico Geib, the musical director at the Griffin School just north of Hyde Park. "We have to zero in on what the kid's interest is, because it's all about passion."

Geib opened Griffin's music program in 2004, coincidentally one year after The School of Rock released. Today, he leads a collection of 30 students – about 37% of the high school's student body – through lessons like music theory, music history, and, ultimately, recording music with ProTools. He says that the most important component of teaching kids to embrace music is to connect them with the music they love.

"If I have a kid who likes Black Sabbath, you bet that I'm going to learn a few Black Sabbath tunes to play with the kid, and we're going to go to town with Black Sabbath. It doesn't mean that Black Sabbath is my favorite band, but it means the kid will grow musically."

That's a line of thinking with which We Love Music founder Ross Carnes would agree.

"They have to feel it, period," said Carnes, who teaches instrumental theory and songwriting from a sound studio in his North Austin backyard, often stepping in to handle drums or bass in a band of 10-year-olds. "That's why I focus on teaching original songs. With a cover, the guitar part might sound good, but the drum part won't. If we're doing original music, I can fine tune and calibrate things exactly the way I want. I can challenge the musicians and teach them something they don't already know. We can work within the context of something they like, because they have ownership."

Carnes' vision sees a manifestation of sorts in The School of Rock when Mooneyham first reveals that he's been working on his own material, an AC/DC-inspired ode to sticking it to the man. Black capitalizes on the experiment and gets Mooneyham's classmates behind the composition. The result is the epic "School of Rock," the movie's central anthem.

"I feel like the message [of the movie] is something that I would have related to as a kid," White said. "You can go create something, and it can be cool now. You don't have to wait to have your bona fides. I remember, as a kid, going to the movies and wanting to re-create it. Movies inspired me to want to create my own version of the movie. [The School of Rock] was about compelling kids to be creative and make music. That's a message that felt worthwhile."

The Austin Film Society celebrates the 10th anniversary of The School of Rock with a Moviemaker Dialogue with Mike White (hosted by the Chronicle's Kimberley Jones) on Wednesday, Aug. 28, 7:30pm, at the Marchesa Hall & Theatre (6226 Middle Fiskville). AFS and Cirrus Logic get the band back together before a screening Thursday, Aug. 29, 7pm, at the Paramount (713 Congress). For tickets and complete details, visit www.austinfilm.org. 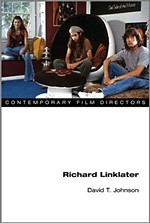