Blood in the Water

'Blackfish' is a whale of a nightmare for SeaWorld's PR department 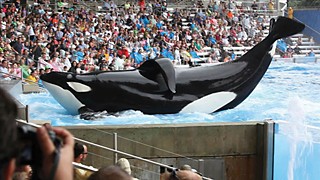 John Hargrove is used to blowing a whistle. He spent nearly two decades as one of SeaWorld's elite; a killer whale trainer, he'd worked with whales in San Antonio, San Diego, and France. "I began and ended my SeaWorld career in the Texas park," he said. Then, last August, he walked away and became a different kind of whistleblower – as one of the former trainers exposing the reality of life for captive orcas in the new documentary Blackfish. He said, "It's a way for me to care for those whales I left behind."

Blackfish takes as its starting point the 2010 death of SeaWorld Florida veteran trainer Dawn Brancheau. She was mauled by Tilikum, the biggest captive male orca in the world. What was truly shocking was that this was the third human death in which he was involved. Director Gabriela Cowperthwaite never paints Tilikum as a murderous monster. Instead, she portrays him as the inevitable result of an industry that takes animals whose natural habitat is the oceans and traps them in glorified bathtubs. The end result is six tons of psychologically and physically scarred whale. There are currently 45 orcas kept in similarly unnatural conditions, and many have been involved in attacks on one another or their trainers.

Even as one of SeaWorld's most experienced staff, Hargrove described himself as "a thorn in management's side. I would speak up and say, 'You cannot treat this whale like a baby machine, you cannot take this calf from her mother, you can't put this whale in a med pool, which is only eight feet deep, for show reasons.'" Not that it did him or the whales much good. He said, "All that ever happened to me was that I'd get in trouble. The running joke was, 'Oh, John's in another closed-door meeting.'"

But two decades is a long time to be a part of an industry you hate. For Hargrove, it finally came down to one animal: Takara. Hargrove had worked with her in California, and he was there when, at 13, she was separated from her mother, Kasatka. He said, "It was such a traumatic experience for Kasatka that we had to put her on medication." Takara gave birth to two calves and was separated from both as she was shipped across the country to Florida and then San Antonio, where she finally reunited with Hargrove. He said, "I'm so careful not to throw around anthropomorphic terms, but I can tell you without a doubt that her spirit was broken." Even though he hated his job – and hated San Antonio even more – "I stuck around because I felt like I gave her California back, and she gave me California back," he explained. "I just felt like I could not abandon her."

It took a combination of knee injuries and SeaWorld's response to Brancheau's death to finally make him quit. He said, "When they testified in the OSHA hearings that they had no knowledge that we even had a dangerous job, I thought, 'You just can't stay anymore.'" Yet it was still tough to talk about his experiences because he feared that the story and the animals would be exploited even more. "I felt like if I talked to the wrong journalist and they just wanted to concentrate on the sensational part of the story, that was going to happen," he said. Then his friend Tim Zimmermann of Outside magazine put him in contact with Cowperthwaite, and she interviewed him one week after he quit. As she started asking him questions, she started crying even before she heard his answers. Hargrove said, "I knew then I'd made the right decision."

There's real fury in the voices of Hargrove and his fellow former trainers as they discuss how SeaWorld attempted to blame Brancheau for her own death, but that's merely one incident in the long history of killer whale attacks and accidents – most of which have been kept out of the media spotlight. That's why he has taken his quest public. He said, "If you won't listen to your most experienced trainers, as soon as your image starts to get damaged, your PR machine kicks into overdrive and you're going to make the changes to try to save face." Hargrove does not expect SeaWorld to suddenly turn their back on the orca industry. "This is about forcing them to take the next step," he said. "If anything I say or anyone says puts pressure on them, and they build bigger and better facilities for the whales, or they stop their breeding program, especially artificial insemination, then that's my goal." And maybe, just maybe, that will help Takara. Until then, he said: "She's stuck. She has no choice. She has to stay in that pool."

Blackfish opens this weekend at the Arbor Cinema at Great Hills and Violet Crown. See Film Listings for showtimes and review.