In late 2005, one of this town's unforeseeable entrepreneurial success stories opened its doors. Game Over Videogames started with one employee and a business model that seemed counterintuitive at best and fiscally suicidal at worst. That employee was David Kaelin, and his revenue stream consisted largely of sales of Atari, Nintendo, and other dated consoles and their games in a world where anything vintage was increasingly being sold on eBay or Craigslist. But Kaelin's risk has paid dividends and then some, as he is now the owner of seven stores throughout Austin, San Antonio, Houston, and their surrounding areas. His most recent store, opening outside of Houston, will have three floors of fun from decades past.

As the Game Over chain expanded, so did its clientele's appreciation for what the stores do. To reciprocate, Kaelin started the Classic Game Fest. Initially held in the flagship store and its parking lot, the festival has grown every year and spread to the new locations. This year, the festival sheds the constraints of the stores and moves to the Palmer Events Center for two full days of tournaments, exhibitions, and live music. For the entirety of the weekend, attendees can play games on classic gaming platforms like the original Nintendo, Sega Genesis, and Atari, as well as more obscure systems like the Neo Geo. Classic video game machines will also be set up to make sure your nostalgia dial is turned up to 11. Even the Apple computer fan booth will be loaded with classic games, including Oregon Trail on an Apple IIe. There's even a coloring station for the younger set if their brains become overloaded with dated technology. At the same time, one of the champions of tech-gone-by, Brett Weiss – author of the Classic Home Video Games series of reference books and retro-pop-culture connoisseur – will be signing his books and likely answering obscure questions about the wild and free days of interactive home entertainment. Want to recoup the $10 you spent on admission? Then bring a few games or maybe that TurboGrafx-16 to sell; Game Over is always looking to restock its shelves.

The tournaments need a few brave souls to put their skills up on the big screen for all to see. On Saturday, the race begins with speed runs of Super Mario Bros. 3, Sonic the Hedgehog 2, and Teenage Mutant Ninja Turtles II: The Arcade Game. If you think you're fast enough, please note that after five minutes you will be booed and forced to walk away in defeat. In other words, you might want to brush up on your warp zones. After that is Neo Geo League Bowling followed by a hotly contested head-to-head Tetris elimination tournament. Should you make it to the final round, you will be stacking blocks at Level 9 to begin, so if that sends shivers down your spine, you might want to bow out. Sunday is for fighters, not lovers, with The King of Fighters '98 and pro-level N64 Super Smash Bros. tournaments.

At the end of each day's pixelated action, there is an afterparty starting at 6pm with live music from the Returners, Gimmick, and Classic Game Fest veterans Descendants of Erdrick on Saturday. The dorks take over on Sunday (as if they hadn't been in control the whole weekend) with a nerdcore hip-hop showcase featuring MadHatter, King Pheenix, Richie Branson, and Doug Funnie.

When all that is done, surely your eyes will be invigorated and ready to return to today's inescapable digital culture of uncanny realism, and thankful for the vacation to a time when it only took 8 bits and your imagination to keep you entertained.

The Classic Game Fest invades the Palmer Events Center (900 Barton Springs Rd.) on Saturday & Sunday, July 13-14. Wristbands for the entire weekend are $10; kids under the age of 12 get in free. Parking at the venue is $7 per day. Visit www.classicgamefest.com for complete details. 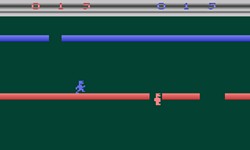 Classic Game Fest Returns
In our day, controllers had one button, and we liked it