Diaries of 'The Beer Diaries'

Two guys, 12 episodes, and more lucky circumstances than you can count

Mike Mann, director of craft-brew-celebrating Web series The Beer Diaries, drinks a Firemans 4 at Baker St. Pub down the street from his studio. Wearing a backpack, T-shirt, and a hemp necklace, he looks ready to go anywhere, to do anything. He gives off the peaceful air of a confident traveler, the type that swears against plans and yet always ends up with stories like the ones from his recent trip to Belize.

"I was visiting some friends there," he says, "and I just thought ... I might as well bring a camera and try and get some beer stuff. It just happened that, while I was there, their first microbrewery ever popped up. I did the first-ever interview with these guys, and I was the first person to drink their beer outside of their company."

I mention the word "fortuitous," and he confirms that this is the "word of the day" for The Beer Diaries. But let's step back. The fortuitousness didn't just start in Belize or with The Beer Diaries. It started further back, in Europe, during a University of Texas study abroad program when a 19-year-old Mann decided to venture a bit outside of his Radio-Television-Film focus and study Italian in Italy, and travel around a bit afterward. And try some beers.

"I was just blown away in both the Czech Republic and in Germany," he says. "I came back and decided I wanted to home brew for myself and for friends."

With the legal age for purchasing home brewing supplies in Texas set at 18, he was soon pouring craft beers into his friends' red Dixie cups and sharing with them the craft-beer revelations he'd experienced overseas.

"I'd bring it to parties and to weddings, that sort of thing, and people really liked it," he says. He volunteered time at a local home brewing shop, balancing his passions for beer and filmmaking, but "never really thought the two would come together." 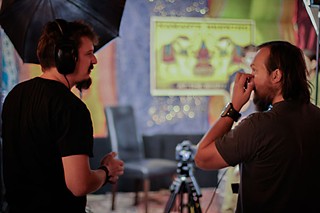 But in 2010, they did just that, when a friend introduced Mann to Jeff Young, the leader of Black Star Co-op's beer team.

Now a mainstay among Austin craft fans, Black Star was on the verge of first opening its doors to the public, an event Mann thought was something worth documenting, despite having never made a documentary before. "I was very interested in all the things he was talking about, and the passion and excitement that he brought [to] this brewery of his own that was about to open up," says Mann. "I asked him if I could film a documentary about it and ended up with a little five-minute piece called 'Brewed.'"

Mann estimates the total budget for 'Brewed' at approximately $7, all of which went to tacos. He enlisted the help of a friend with a camera, did the sound work and directing himself, and wrapped the production in two days. A week later, the footage was edited, and the film was submitted to South by Southwest a day before the final submission deadline. The film was accepted into not only that festival, but several others.

"I was completely elated about the entire thing," says Mann. "That whole process got me really interested in making documentaries."

Following "Brewed," he found himself acting as the director of promotional videos for Bats & Beers, an event series which paired local breweries with local eateries and set patrons out on a paddle boat to watch the quintessential Austin bats take flight. It was through this that Mann met some guys from Thirsty Planet, which would later serve as the subject of the second episode of The Beer Diaries. 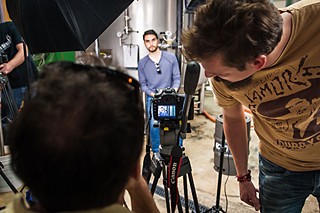 That's already a whole series of chance encounters and introductions. But before the idea for Diaries could even be conceived of, Mann would first need to accidentally meet the show's future host, BioWare co-founder Greg Zeschuk, at the Whip In, on a night when Zeschuk had attempted to purchase a limited-edition beer from (512) Brewing Co., found it to be sold out, and sat down with something on tap at Mann's table.

"I didn't know who Greg was at the time, about his past, anything like that. He said 'What do you do?' I said that I did documentaries, a lot of stuff about beer recently, and he said, 'Oh, wow, I've been wanting to do beer documentary stuff, or a beer show. And I said 'Well, let's give it a try.'"

Zeschuk is driving through Canada when he phones me up.

"It's funny, because I'm actually just now leaving the Big Rock brewery in Calgary, and that was the beer that got me into craft," says Zeschuk. "But it wasn't really until Austin, when I started going to Austin for Star Wars: The Old Republic and games for BioWare, that ... I was there for the birth, you know what I mean?"

Zeschuk saw something in the Austin craft-beer scene: a booming, passionate community of locavores who were discovering the beer geek inside of them in droves. "It was sort of phenomenal. The variety and the quality were so amazing that it just sort of made me a superfan."

And then he went to the Whip In to look for a limited-release beer.

"I didn't really remember how that all got started, until the (512) episode," says Zeschuk. "I realized it was their Double Pecan Porter [Whiskey] Barrel Aged, and I suddenly realized, 'Oh my goodness, I was actually at the Whip In trying to buy that beer, and that's when I met Mike.'

"So we set it up, just to kind of meet a few more times and talk about it, and to see what could happen," says Mann. "I knew the Thirsty Planet guys, so when Greg said something about wanting to set something up interviewing brewers, I said 'OK, I already know some guys. Let's give them a call and see if they're interested.' We had no idea what to expect or what type of format to go after."

Thirsty Planet was interested, and Zeschuk and Mann discussed what they were interested in knowing about the brewery and what questions would be required. Then they set out with three cameras to shoot. They reviewed the footage, went back to Thirsty Planet a couple more times, and edited together what would eventually become the second episode of The Beer Diaries.

Mann uploaded the episode to his Vimeo page, and he and Zeschuk showed it to some friends. But Mann had accidentally forgotten to put a password on the video, and there were quite a few more people watching the episode than they'd anticipated. And some of those people were brewers.

"They're all colleagues; they all talk amongst themselves," says Zeschuk. "Once people started seeing what we were making, it was one of those funny situations where it was a no-brainer. They were like, 'All right, let's film our episode.'"

Mann and Zeschuk, united by a love of craft beer and a desire to explore it, quickly realized there was even more to focus on and more people to hear from than they could have possibly imagined from their first meeting at the Whip In. Fortunately, the online format has allowed them to actively adapt their content to fit the new possibilities they've discovered.

"That's the awesome thing about the Web," says Zeschuk. "You can just roll something out every time you think 'Hey, I've got this idea,' ... and you just keep doing it and doing it until you're satisfied. It's a very flexible medium, and it's fun to work in."

"We wanted something that we could hold onto ourselves and just really nurture and build ourselves. Kind of a grassroots level," says Mann. "And that's really what the show's about, because that's what these guys have been doing themselves. It's not something we're trying to get rich off of. We're just trying to show these guys' passion, and trying to make them celebrities."

Now 12 episodes deep, and having enjoyed several sold-out premieres at the Alamo Drafthouse, The Beer Diaries is just the tip of the iceberg. The duo has two other shows currently awaiting launches (The Beer Diaries: World Tour, and a show in which Zeschuk joins three other beer enthusiasts to discuss various beers along the course of a pub crawl); a virtual brewery tour feature on their website that allows users to navigate 360-degree renderings of each brewery visited on The Beer Diaries; a travel show born from Mann's trip to Belize that explores foreign cultures through their beers; Google Hangouts hosted by Zeschuk, in which he and people from home discuss a chosen craft beer; and a feature documentary from Mann on the currently evolving Texas beer laws.

"The trickiest part is staying on top of everything," says Zeschuk. "That's the biggest challenge."

But if the stars keep aligning in such a serendipitous manner for this team, viewers can expect Zeschuk and Mann to brew up nothing but successful projects.