Reading the next chapter of the AFS playbook 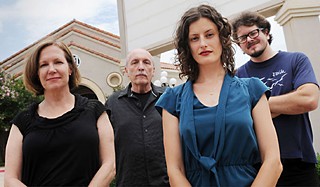 There aren't many superstar film programmers. So even though he'd probably blush at the title, when Lars Nilsen announced earlier this year that he was joining the staff of the Austin Film Society, that was headline news for film aficionados. Synonymous with cult cinema as part of the Alamo Drafthouse booking team, Nilsen sees his new gig as a kind of homecoming. He said, "I always felt like I was in debt to AFS for everything they had done for me."

When he moved to Austin in 1994, AFS' free screenings were his film school. "I was a snot-nosed kid going and watching free movies," he said. "By doing that I was seeing Godard and Fassbender and Carl Theodor Dreyer and John Woo and all these movies that I would probably have never sought out by myself." Now he is returning the favor by planning its latest programming strand: AFS at the Marchesa. The society isn't taking over the Marchesa Hall & Theatre, but it is becoming its biggest regular tenant, with a plan for 16 screenings a month. It helps that the North Austin venue is run by veteran punk promoter Deborah Gill (see "Parlor Game," Music, Feb. 27, 2009), a kindred soul to the society's grit-and-determination approach. As Nilsen put it, "Punk rock is the guiding and abiding model by which the people get things done."

Many cities have film societies, and often they are the only choice for audiences seeking an alternative to that weekend's newest releases. Yet in their quest to educate and entertain, sometimes they suffer from what Nilsen dubbed Vertigo syndrome: "You see the same classic films over and over again." That's less of an issue in Austin, where audience options swerve from the sacred to the profane, from the Old World grandeur of the Paramount's summer season to the experimentalism of Cinema East. Nilsen compares Austin's diverse cineastes to punk scenesters: "You've got the kids that are soaking up the scene and get all the benefits. Then as those kids get older, maybe they fall away from the scene. But if they stay committed and their heart's still in it, then they become the big kids, and they're the ones who go, 'OK, we're going to do this punk show, we gotta go find a storage space, we've gotta find a hangar, we've gotta go steal some beer.'" That cinematic cornucopia doesn't remove the need for a good, active film society. Nilsen said, "When you look at what's needed from AFS, you look at the whole city and at what people have available, and then you say, 'What is the other excellent programming that they're not going to get in this setting?'"

AFS Executive Director Rebecca Camp­bell agreed. "It's kind of a miracle that the film society and other places in Austin offer so much alternative fare," she said. So as the shape of Austin audiences changes, so does the role of the society. She's overseeing one of the biggest periods of change in its history: New staff, new programming series, and the growth of Austin Studios mean a reinvigorated society, and having Nilsen on board is one surprising bonus. She said, "Lars approached Holly [Herrick, associate artistic director] and said he was thinking about making a change."

It's not a complete parting of the ways with the Alamo – Nilsen still hosts Weird Wednesday, his weekly celebration of cinema's sleazy underbelly, at the Alamo Ritz. Think of it more as musical differences. Over the past five years, the Drafthouse has undergone a massive expansion, adding extra sites not just around Austin but across the U.S. They were becoming the Green Day of alternative cinema, while Nilsen wanted to be in Black Flag. He said, "When I looked in the mirror, I really had to admit that I didn't have that much interest programming for New York or Los Angeles or suburbs."

His decision to join AFS is a major moment for both. It's not just that he is a walking IMDb; he also knows how to navigate the increasingly complicated world of hunting down archival prints. A frighteningly large number of classic films have never been digitized, and studios are increasingly coy about leasing out their archival 35mm prints, but Nilsen and his fellow programmers know how to seduce them into handing over their treasures. It's a skill that he's happy to deploy for AFS. Nilsen said, "If I wasn't programming movies for Austinites, I may as well go back and drive a cab again."

His first big project is bringing his encyclopedic knowledge to the Marchesa. Campbell describes the space and the programming opportunities it brings "as a great move to this long-held dream of having our own theatre." For years, the society rented spaces around town like the Paramount and the Alamo Drafthouse, and it has a small screening room at Austin Studios, but no permanent home. Four years ago, the society started thinking about becoming less nomadic ("Nonprofits in general like the idea of having a storefront," Campbell said). The first thought was to build their own theatre, but that would take time and money, so they settled on a "hybrid between what we're doing and a brick-and-mortar future."

Staff had looked at several sites, including the old Dobie Theater, before they came across the old Lincoln Village theatre. The space has been through a lot of changes since the lights went out in 1999. Two of the three screens were torn out and turned into exhibition space, first as the Monarch Events Center and now as the Marchesa. It's served as a concert venue and conference space, but through it all, one 278-seat screen has remained in place. Yet it still needs some renovations, and the society is trying to raise $120,000 by July 3 to undertake massive technical upgrades. First is a 35mm changeover system – essential for archival prints – and a digital projector and DCP system, so they can screen new films and digital restorations. That will also mean a new Dolby 5.1 surround system and rehabbing the projection booth. "The possibilities just come wafting out of there," said Nilsen. "You see the ghosts dancing across the screen of all the movies that have played there and are going to play there, and it's just this magic Cinema Paradiso feeling."

Ultimately, the society is still thinking about having its own permanent location, and now that it has absorbed the old National Guard Armory into Austin Studios (see "The Changing Shape of Austin Studios," May 10), there is early talk about building a bigger screening room or theatre there. With that in mind, Campbell said, "The bulk of the money that we're raising and spending is for equipment that is conveyable." For now, it's essential to turn the Marchesa into what they hope will be the "best little art house in Texas." Campbell said, "It might be an interim solution, but it's one that could last a good, long time."

Part of the money will go into renovating the lobby, creating another space for Austin audiences to mix and mingle with Austin directors. After all, this isn't just growing as a film-appreciation city; there's also been an explosion in film production. Since 1996, the AFS Grant program (formerly known as the Texas Filmmakers' Production Fund) has provided development, production, and finishing cash for a who's who of local rising talent. Recent recipients, such as Kat Candler ("Black Metal"), the Zellner Bros. (Kid-Thing), and Andrew Bujalski (Computer Chess), are already winning awards for their work. But Campbell would ultimately like the society to provide more production support. She said: "We work like hell to raise money for filmmaker grants. Wouldn't it be great if we could get more involved in the whole life of their project?"

For Nilsen, the fans and the filmmakers are all part of the same film-appreciating crowd, and a key role of AFS is to bring them closer together. He said: "We're in a real renaissance of filmmaking, with incredible filmmakers. Somebody's got to serve that, and other entities are going to serve that to a certain extent, but we're the one that's going to work at it full time, every day." The Marchesa will play a key role in that task, bringing local audiences and local directors together. "I go to these screenings, and I see the Zellners, and I see Kat Candler, and they're sitting there and enjoying these movies," Nilsen said. "We're putting together this giant cerebral cortex."

For more on AFS at the Marchesa and its fundraising goals, visit www.austinfilm.org/marchesa.