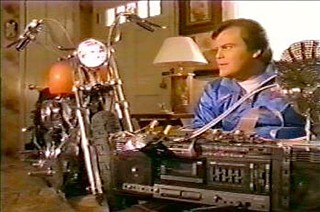 With so many cable channels and streaming platforms at our fingertips, the crowded landscape of contemporary television gives the impression of infinite choice. Yet, in reality, our options represent only a fraction of the industry's output.

Consider Heat Vision and Jack, the sci-fi sitcom starring Jack Black and Owen Wilson: Fox ordered the pilot in 1999, then rejected it. Black, according to the logline, plays a "renegade astronaut who becomes the smartest man on Earth whenever he's bathed in sunlight," and Owen Wilson co-stars as the voice of Jack's sentient, hypersensitive motorcycle. Clandestine VHS dubs circulated among fans for years, but relatively few people had heard about it before it surfaced on YouTube. Heat Vision is just one of TV's countless unaired pilots: a show scripted, cast, shot, and doomed to oblivion.

This weekend, creators Rob Schrab and Dan Harmon will present the show, along with a never-before-seen documentary about its demise and cult resurgence, at the second annual ATX Television Festival, which runs June 6-9. The dark world of unseen television is a big theme of ATX's program this year. Other lost shows on the slate include Richard Linklater's $5.15/Hr. (HBO, 2004), a dark comedy about minimum-wage drudgery at a chain restaurant called Grammaw's starring America Ferrera; and Ken Sanzel's Nomads (2010, CW), an hourlong action drama featuring Friday Night Lights' Scott Porter as a hostel-trotting backpacker in Thailand who becomes a part-time CIA operative. What happened to these pilots? Who owns them? And why watch passed-over product when an overwhelming mass of successful series is easily accessible? I sat down with ATX programmers Emily Gipson and Caitlin McFarland to discuss the plight of the pilot – and why we should care.

"If a show doesn't get picked up, people think, 'Well, how bad was it?'" said McFarland. But quality is rarely the sole determining factor. Perhaps a concept is too expensive, she explained, or maybe it diverges too much from a network's house style. Conversely, it may seem too similar to a project in development somewhere else. Cost may have been the problem with Nomads, and weirdness in the case of Heat Vision. Rumor has it that HBO deemed Linklater's show too depressing.

Most pilots simply fall through the cracks. According to a 2011 article in The Wall Street Journal, ABC, NBC, and CBS each field around 500 pitches a year; of these, they commission 70 scripts and order the production of 20 pilots. Of that number, only four to eight shows ever make it to air, and one or two will return for a second season. Cable networks order fewer pilots to begin with, though the formula varies from outlet to outlet. Considering the odds, it seems a miracle that envelope-pushing shows like Fox's Get a Life, AMC's Breaking Bad, or Showtime's Homeland ever got the green light.

Netflix, which debuted its original series House of Cards to great fanfare this year, has sophisticated user data to help design a hit, while Amazon Prime recently rolled out a crowdsourcing model for its pilots. With Spotify reportedly planning to unveil its own programming, new development models are sure to supplant the networks' kitchen-sink technique. Innovation and variety appear to be on the rise, but so are "reboots." House of Cards is a remake of a British show, and the new Arrested Development episodes are the long-awaited follow-up to Fox's canceled series (and they'll screen at the State Theatre on opening night, June 6, followed by a Q&A). It's not clear what this means for shows that don't have a Kevin Spacey or a Jason Bateman attached. Then again, even at the networks, big budgets and brand recognition don't necessarily seal the deal – hence CBS' recent pass on Beverly Hills Cop.

While networks remain tight-lipped about their reasons for rejecting a show, Gipson says, Twitter and entertainment blogs have fostered endless fan speculation, and DVD extras and Web exclusives have made celebrities out of showrunners like Mad Men's Matthew Weiner. I'm anxious for news about AMC's Halt & Catch Fire, currently in postproduction – but, as McFarland warns, "It's only a pilot. You may never get to see it."

Why isn't there something like the Sundance Channel for one-off shows? Partly, the programmers say, it's a rights issue. The network that orders a pilot owns it, so its creators can't resell it, and networks have little incentive to promote something they've already vetoed. Copyright is circumvented on the Web, of course. Google The Jake Effect, the painfully dull unaired NBC sitcom starring Jason Bateman as a lawyer who leaves a high-powered firm to become a high school English teacher. Its debut was stymied the season before Arrested Development appeared, thank God.

Heat Vision, once tantalizingly arcane, is now all over the Internet, while $5.15/Hr. seems impossible to track down. Perhaps obscurity, or Twitter hype, overinflates audience expectations. Can an unseen show ever live up to the masterpieces we imagine? Even if not, the ATX programmers say, there is value to these pilots, which the festival has special permission to screen publicly. Viewers get the opportunity to make up their own minds about shows the networks decided weren't worth the trouble, and creators have a chance to sit in a theatre with an audience and get real feedback. Do people laugh when they're supposed to? It's a privilege film directors, actors, and producers regularly enjoy. Bringing the small screen to the big screen, ATX unearths fresh TV history.

At Any Price
This family drama puts a human face on corporate agribusiness.