Soderbergh flickers into retirement with 'Behind the Candelabra'

Michael Douglas (l) and Matt Damon star in Behind the Candelabra.

There was perhaps no more highly anticipated premiere at Cannes than this week's Behind the Candelabra. But is there anything hiding under all that glitz?

The flashy Liberace biopic, directed by Steven Soderbergh (his last big project before retirement from Hollywood) and based on the tell-all book by Liberace's former lover Scott Thorson, offers all the incredible production design and it-all-falls-apart drama you would expect based on its glossy, classically Soderbergh trailer. It also features predictably solid performances from Academy Award-winners Michael Douglas (who plays the late-career performer) and Matt Damon (who plays Thorson), with Rob Lowe and Dan Aykroyd providing excellent and often hilarious support work as Thorson's plastic surgeon and Liberace's manager, respectively. The film is full of the sort of impossibly beautiful compositions, larger-than-life set-pieces, and clever transitions for which the director is consistently praised, and it clearly used every last cent of its $28 million budget – fitting for a subject known for his excess. Fans of Soderbergh's Magic Mike will likely take particular pleasure in this film's voyeuristic peek-inside posture and sexed-up tone.

But in sharp contrast to Soderbergh's best work, particularly 2009's criminally underappreciated The Informant! (also starring Damon) and beautifully unsettling The Girlfriend Experience, Behind the Candelabra doesn't build to a satisfying and resonant climax. To be sure, the film's closing sequence is visually perfect, and the third act features some incredibly smart writing. Douglas is as earnest as ever in his performance as the over-the-top, closeted piano legend (complete with sagging belly and bald head), and Damon proves yet again that he can do great work no matter what he is given; watching him squirm and strain to extract maximum expression from his dramatically altered face in the film's second half is a genuine pleasure. And yet as the credits roll, you can't help but think back to the all-too-telling trailer and draw two conclusions: You got exactly what you signed up for, and it was nevertheless a bit underwhelming. Perhaps this is attributable in part to the film's limited scope, as it only covers the period in the late Seventies and early Eighties during which Thorson's relationship with Liberace came and went.

Ultimately, Behind the Candelabra offers all of the fur coats, fake tans, and naked movie stars in gold hot tubs drinking Champagne you need to make for an excellent Sunday evening. But even though the film's tagline is "Too much of a good thing is wonderful," for Soderbergh, it winds up being just pretty good.

Behind the Candelabra premieres on HBO Sunday, May 26, 8pm.

READ MORE
More Behind the Candelabra 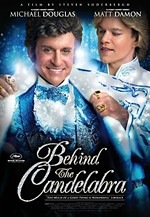 Gay Place
This week it's all about the Tops and the Bottoms, loves. How do you like your 2013? 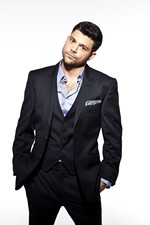 Swimming 'Upstream'
Shane Carruth on pigs, money, and being a control freak