Leonard for a Day

Louis Black and Leonard Maltin reminisce on 50 years of moviegoing Famed film historian and critic Leonard Maltin (author of the annual series of Movie Guides) is coming to Austin to introduce Lady for a Day. This interview is by Chronicle Editor Louis Black, who has been friends with Maltin since junior high school. They caught up by phone late last week to chat about the film, their history, and some of their favorite movie memories.

Leonard Maltin: Who is this again?

AC: We've talked before. You probably don't remember. ... Are you happy with the choice of the film being shown?

LM: Well, it's one of my all-time favorite movies. It does what I think the best vintage Hollywood movies do: It makes you feel better. It makes you feel better about yourself, about life, about humanity. Period. It was unavailable for screening for decades because Capra remade it as Pocketful of Miracles, and when Frank Capra Jr. finally allowed his father's 35mm print to be copied and put it back in circulation, my wife and I went to see it while we were still living in Manhattan at the Regency Theatre on Broadway. We left walking on a cloud. Some people don't consider that great art. I do. ... You know, the whole first half of the Thirties was just a golden time for Capra, as well as for his underappreciated writing partner, Robert Riskin. But it's just the perfect movie in so many ways.

Capra loved actors, and he loved character actors, so he paid attention to even the smallest parts in his films. This is one of those movies where every role is filled to perfection by just the right person with just the right face, just the right personality. He borrowed Warren William, his leading man, from Warner Brothers, where he was the king of Pre-Code movies. Glenda Farrell, the leading lady, was also under contract to Warner Brothers. May Robson is the – some would say the real star of the movie, because the film revolves around her character, Apple Annie, the Damon Runyon character that Bette Davis played in the remake. Robson was a veteran character actress, but this propelled her into the limelight at a time when another senior citizen, Marie Dressler, was one of the top box-office stars in America. And it's got people like Ned Sparks and Guy Kibbee, Walter Connolly, Nat Pendleton. And then even in the bit parts, you know, wonderful people, great faces, great voices.

LM: I credit television with striking the first spark because, as I have to explain to the young people – that is, now everybody – while we were growing up, TV was a living museum of movies. So every day of my life, I watched The Little Rascals and Laurel & Hardy, and later, the Three Stooges, when they came on TV. And as somebody reminded me, even The Howdy Doody Show showed silent comedy shorts.

All of that turned me on tremendously. And of course all the old cartoons; the whole entire history of animated cartoons was laid out on a daily basis as well.

In 1958, my parents took me to see Robert Youngson's The Golden Age of Comedy – that, if anything, was the one film that turned it all around. Because to see excerpts from great silent comedies on the theatre screen was an even more powerful experience. Which led me to the public library, where the first book that I ever took out on the subject was Mack Sennett's autobiography, King of Comedy, which I read and reread and re-reread.

At the same time, I was getting hooked on all things Disney. Because this was the time of the Mickey Mouse Club and of Walt Disney hosting his own weekly television show, and that had a profound – and lifelong – influence on me. I have a children's story, a Grimm's Fairy Tales book – I don't know how it's survived all these years – that I had when I was very, very young. At the end of one of the stories, there's a lot of space on the page, and it says "The End." I drew a box around it in crayon and wrote, "A Walt Disney Production."

So was I brainwashed? You tell me; I don't know. But, you know, to me, Walt Disney – to me and my generation – Walt Disney was a person, not a corporate name. There was a very strong connection for millions of people at that time that today's kids don't have.

AC: Now, when did we first meet?

LM: I think we were 13, and I think we were in the eighth grade. Almost immediately we started traveling in to the city. Well, we grew up in a very nice suburban town called Teaneck, New Jersey, which was five miles from the George Washington Bridge. And in those kinder, gentler days, our parents had no trouble with us hopping on the bus and going across the bridge into the city for the day on any given Saturday or Sunday or holiday. And that's just what we did.

We would go to Fourth Avenue South, which was then Book Row, and pore over the used book stores there. We would go to the very odd and eccentric movie memorabilia shops, like the Memory Shop run by Mark Ricci, who always reminded me of Pancho Villa in more ways than one. Oh and Movie Star News, Paula Klaw's. Little did we know ... that we were talking to the sister – the sister – of Irving Klaw, fabled pornographer and purveyor of naughty photos. We were just interested in stills of Laurel & Hardy. We'd never heard of Bettie Page. At least, I'll speak for myself, I'd never had ...

We would go to the Museum of Modern Art for matinees. OK, I tell this to people; they don't believe me. There was some arcane New York state or city law that forbid a minor from buying a movie ticket. The museum would happily sell us admission to the museum, but not the free tickets to the film show in the museum. We'd have to stand on 53rd Street and wait for a friendly-looking adult who was about to enter the doorway and ask if they'd be kind enough to buy us – we'd give them money – but would they be kind enough to get us movie tickets. And we always found someone to do it. Then one time, I did it just inside the lobby because it was raining, and the grouchy ticket seller said, "You know you're responsible for him now!"

LM: Yes. And there was the night – the unforgettable night – that we went with Mike Polacek, the Laurel & Hardy collector who was visiting from West Virginia, and we're trying to take the subway home and accidentally got on the Canarsie line to Brooklyn and got terribly lost for a very long time in the subway system before eventually finding our way home.

AC: [laughs] It was quite a collection of folks at the Theodore Huff Society.

LM: Yeah, it's hard to describe the Theodore Huff Society. I like to say that it's not that a lot of the attendees were gay or homosexual; they were more asexual. They were utter and complete devotees of old movies. And a motlier assortment one could never find.

There was the night that my mother took me and there was a guy who was wearing a windbreaker and she saw something moving inside the windbreaker, couldn't figure out what it was. It was a monkey or an orangutan or a rhesus monkey. Yeah, and we all figured that Bill Everson let him stay because the monkey watched the movie.

Enough time has passed that I now get to revisit films that I saw at the Huff Society because I don't remember them anymore [laughs]. But Bill exposed us to stuff we would never have seen anywhere else or by any other means or through any other means. It was amazing, it was wonderful, it was slightly surreal – the presence of people like Calvin Beck added to that.

LM: We're still watching movies together, we're still enjoying it, we're still enthusiastic about it – not blasé. I didn't know there was a Paramount Theatre in Austin! That's wonderful. We're so looking forward to it.

The Paramount Theatre presents Leonard Maltin on Friday, May 24, 7:30pm. He'll introduce Lady for a Day and then join in a discussion after the screening about his career and classic film. Visit www.austintheatre.org for tickets and more information. 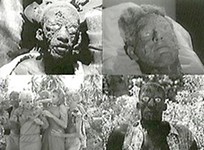 Back to the Grind House
On the occasion of QT 6, an ode to the demented poetry of triple bills in iniquitous theatres 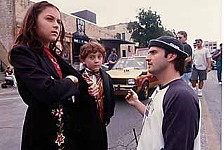 Thirty Years on Location
A History of the Texas Film Commission