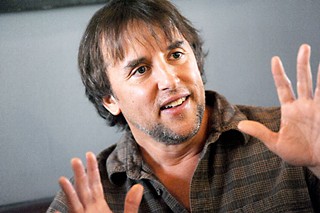 There's a moment in Richard Linklater's 1998 crime drama, The Newton Boys, when the eponymous bank robbers bemoan the existence of an insurance company. The filmmaker may be excused the same feelings, as he is currently suing his insurers over the loss of his personal filmmaking archive, destroyed in the 2011 Bastrop fires.

In 2008, Linklater constructed a building to house his archive in Paige, just east of Bastrop along Highway 21. In it, he stored scripts, production materials, publicity info, and personal documents, stretching from his underground masterpiece Slacker to 2008's Me and Orson Welles. He has now filed suit in Travis County District Court against Truck Insurance Exchange, a part of Farmers Insurance Group, alleging breach of contract. The two sides laid out their cases before District Judge Stephen Yelenosky on May 6. Linklater's property was one of thousands damaged by the wildfires in early September 2011. As he was holding large fundraisers for fellow victims of the blaze (see "The Film After the Fire," Sept. 14, 2011), he was also trying to sort out his own insurance claims. On Oct. 14, 2011, TIE Commercial Claims Supervisor Michael Davidson informed the director that his firm would not pay out because the archive was at "a location that is owned by you that is not specifically named in the declarations of the policy." Linklater's attorney Mark Kincaid argues that the original terms of the policy language, as well as later revisions, mean that the archive should have been covered at the Paige address. Linklater has requested that even though the archive was valued at $500,000 in July 2010, he simply wants to be paid the $239,000 maximum stated in his policy.

However, for film historians, the value of the archive is not in the money; its importance in documenting the history of Central Texas filmmaking was incalculable. The material, mostly stored in bankers' boxes, was a treasure trove of Linklater memorabilia: dailies from Dazed and Confused, seven boxes of historical research materials for The Newton Boys, original video and sound recordings for Slacker, and dozens more boxes spanning his entire filmmaking career. There was even material from incomplete projects, like props from his HBO pilot $5.15/hr and the accounts for his abandoned high school football drama Friday Night Heroes.

Yelenosky is expected to rule later this week. Check austinchronicle.com/pip for updates.