AFS Doc Nights: 'How to Survive a Plague' 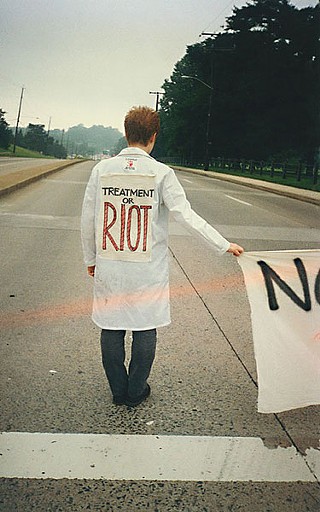 David France's Oscar-nominated How to Survive a Plague (2012) reprises the terror and panic-filled decade of 1987 to 1996, a time when some "mysterious cancer," a terrible wasting disease, first began spreading through the NYC gay community, felling the otherwise healthy – and the medical establishment had absolutely nothing in its toolbox to combat it. Moreover, no one – and that included the drug companies – seemed all that terribly concerned about it. Those were the days, you will recall, of the Bush père administration and later, Bill Clinton, when the loudest and most obnoxious anti-gay disinformation was coming from the pulpits of the Catholic Church and the mouth of Jesse Helms, the senator from North Carolina.

Watching helplessly as legions of HIV-infected gay men, with their tell-tale purple splotches of Kaposi's sarcoma, transmogrified into walking skeletons en route to gruesome deaths, a group, some of whom were themselves HIV-positive, decided to take matters into their own hands and mobilize for a cure. Hence was born ACT UP (the AIDS Coalition to Unleash Power). Initially, ACT UP was known for its in-your-face guerilla tactics – crashing, say, a mass at St. Patrick's Cathedral in outlandish costumes, staging sit-ins at government and drug company offices, and actually stretching a huge condom over Jesse Helm's house. At some point, a core group of founders, including playwright Larry Kramer and Peter Staley (a Wall Street bond trader who later formed an offshoot called the Treatment Action Group) realized that a far more focused and results-oriented approach was called for. They launched a tactically savvy, desperation-driven campaign to get educated in the science of virology and drug development protocols. Then, armed with this newly acquired expertise for their agenda, they forcibly elbowed themselves, as erstwhile co-pilots, into the "cockpits" of the National Institutes of Health, Federal Drug Administration, and various drug companies, for what turned out to be a years-long race against time – with heartbreaking setbacks aplenty – to find effective, affordable drugs for AIDS treatment.

First-time filmmaker and veteran journalist David France takes us through the chronology of these riveting times with the effective use of archival footage shot by those who were there at the time, though, alas, not necessarily still here.

Austin Chronicle: How did you come to make this film?

David France: For some time, I had felt a need to go back and revisit those dark plague years in America. I was especially moved by a conversation I had with one of the lead treatment activists from the time, Spencer Cox. He reminded me of the amazing and heroic work that so many people undertook then, and of their victories. Without AIDS activism, without groups like ACT UP and Treatment Action Group, we wouldn't have seen the advent of effective medications – at least not on the same schedule. Thanks to them, millions of people are alive today. And yet this piece of history – gay history, American history, human history – had slipped from our consciousness. I felt obliged to go back and resurrect it.

AC: What were your biggest hurdles in making this film?

DF: For me, the hardest work was finding the archival footage I used in making the film. AIDS activism is the first movement that had technology for creating its own moving-image historical record. Activists had taken up the camcorder as a tool of activism – or of impactful art, or to create what amounted to the first YouTube-type community-based news gathering operations. My task was to find out who had this footage, where it was stored, was it still in a shape for viewing after so many years, etc. Ultimately I located 33 different cinematographers and was allowed to combine their work for the film. Some of the footage was too far gone to be preserved, but much of it was still viewable – and thank God for that, as these people created the only record of these epic years.

AC: Why did you decide to construct the film almost exclusively from archival footage? Did you find that your journalism background was of help in making your first film?

DF: This was an important decision. The images I found in that old footage brought me back to those years, which I lived through and covered as a journalist, in an intense way I hadn't anticipated. They reminded me of the absolute uncertainty of those days, of our inability to know from one day to another who would live and who would fall to the plague. You actually see that in the footage, the looks in people's eyes. And you watch people going from hearty and robust young men to frailty. I knew that this was a uniquely powerful way to convey to future generations the toll of the epidemic. But the footage also captures the seeds of what has become a vast gay rights movement. The brilliance of the individuals in the film built the foundation for this movement and show the heroics of the community in a way that has never been accessible before.

AC: Were you surprised by any of the reactions to the film?

DF: I knew this was an incredible story. And I knew that most people who felt they knew the history of AIDS would be astonished by this part of it. So I'm not at all surprised that they have responded the way they have. Young people especially are thrilled by the story – how a small handful of young people, some of them HIV-positive, took on a vast interlocking system of research institutes and pharmaceutical companies and turned them into a nimble, humane, and transparent effort to find drugs that would work. Together they brought to market the protease inhibitors which in 1996 turned HIV from a death sentence to a survivable condition. Inspired by their work, the national campus-based group called the Student Global AIDS Campaign grew by 40% to campuses across the country over the past year, bringing new attention to the need to get these pills out to the people who most need them in the developing world.

AFS Doc Nights screens How to Survive a Plague on Wednesday, May 15, 7pm, at the Marchesa Hall and Theatre. Visit www.austinfilm.org for complete details and ticketing information.