Get the Green Light

Great talent attracts great talent. It would be easy to look at film producer Sarah Green's filmography and use the basic laws of attraction to explain her success. Among the directors she has supported over the last two decades are figureheads of American independent cinema such as John Sayles (City of Hope, Passion Fish) and Terrence Malick (Tree of Life, To the Wonder), as well as such multiplatform artists as David Mamet (Oleanna, American Buffalo) and Julie Taymor (Frida). "I really appreciate working outside the system, as it allows for the greatest amount of creative freedom for the director," Green explained during a telephone interview.

It can sometimes be hard to pin down the specifics of what the job of a film producer entails. That's because the tasks may vary from film to film, according to the needs of the director. Yet it's not all producers who can adjust their services to fit those varying needs. Green, however, embraces her role in the creative support system. "One of the great delights of my job," she said, "is getting to know an individual director and their working style, and learning how best to support their process – which may be entirely different from one director to another." In a separate interview, Mud writer/director Jeff Nichols recalled Green telling him her working method during their first meeting: "I find people that I respect and whose work I want to support and then I support it."

Green, who is based in Austin (along with Nichols), remembers that first meeting. "Jeff gave me the screenplays for Take Shelter and Mud at the same time. When I read them, it was immediately apparent that Jeff was a filmmaker. From the first line of Take Shelter to the close of Mud – these were fully realized visions. I told him I'd make either one that day." She went on to produce both films, and is on board for Nichols' next feature, currently in preproduction.

Although most of a producer's work occurs behind the scenes, a couple of Green's contributions to Nichols' films are fully evident onscreen: the casting of pre-breakout Jessica Chastain in Take Shelter and gifted child actor Tye Sheridan in Mud. Both were cast members she had just worked with in The Tree of Life, and she recommended these relative unknowns to Nichols.

Green describes working on Mud as "total fun – working on the various rivers of Arkansas, watching Tye Sheridan mature as an actor, getting to know my hero Sam Shepard." None of these things is the takeaway of a producer seeking to bask in the reflected glory of her filmmakers. Green is a rare breed: confident enough in her own skills and the talents of her filmmakers to render the glory of the spotlight superfluous. n

For more on Sarah Green's work with Jeff Nichols, see "Clear as 'Mud.'" For a review and showtimes for Mud, see Film Listings. 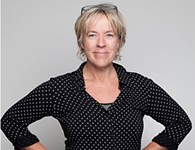 The Texas Film Awards Celebrate the Maverick Spirit
Shirley MacLaine, Jeff Nichols, and others to be honored