The Many Faces of Janus

"Treasures" is all wrong – too musty, too inapt with its presumption of universal appeal – for such a beauteously bonkers lineup. Call these wildly diverse films objets d'art – and, really, even the most virulent Antonioni detractor can't quibble with his composition. Or, less charitably, call them objects of profound curiosity, as in the case of series opener WR: Mysteries of the Organism, surely one of the porniest movies ever to bear the AFS imprimatur (and that's not even getting to the radical politics or talking decapitated head).

What links the Austin Film Society's latest Essential Cinema series is distributor Janus Films, the vaunted Boston-born outfit that mainlined arthouse and world cinema to a hungering domestic audience. You're likely to get whiplash one week to the next – as, say, Red Desert's spare essay in alienation hurdles into The Sword of Doom's samurai bloodbath – and that's a testament to both the diversity of Janus Films' archive and the enduring sense of humor of AFS' programmers. What else but a sly grin puts Dusan Makavejev's nutty homage to the defamed orgasm pioneer Wilhelm Reich (or "WR") on the same bill as Louis Malle's Tati-on-amphetamines charmer Zazie dans le Métro and Clouzot's nails-dug-into-palm proto-thriller The Wages of Fear? But maybe that's small-minded of me: After all, free love is what brings 7-year-old Zazie to the city to run amok (mom has a sex weekend scheduled with her Parisian boyfriend), and Zazie, it must be said, is an absolute hellion. Meanwhile, The Wages of Fear dramatizes hell on Earth, as four men attempt to transport a load of highly combustible nitroglycerine across a South American mountain pass. Venn diagram the lineup, and more connections pop up: Three decades separate the making of Ozu's Tokyo Story and Ichikawa's The Makioka Sisters, but another 30 years on, and they both still have relevant things to say about family dynamics.

Maybe it's all interconnected, or maybe it's all just some mystery-bag grab, presented in glorious 35mm. No matter. The pictures are provocative, vital, and visceral. A bounty. Which is just another word for treasure.

AFS Cinematheque at the Marchesa Hall and Theatre (6226 Middle Fiskville, near Highland Mall)


The latest Austin Film Society series screens Tuesday nights at 7pm at the AFS Cinematheque at the Marchesa. See www.austinfilm.org for ticket info. 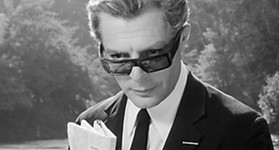